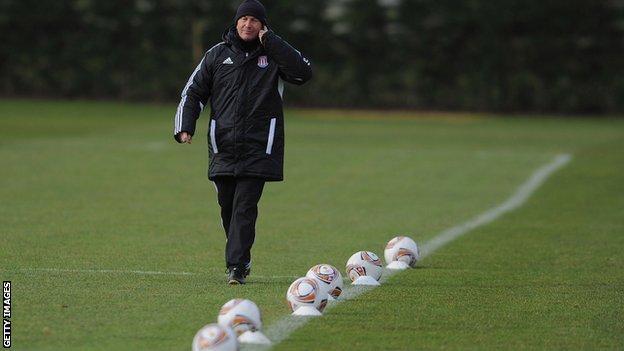 Stoke City have announced plans for a £6m investment to improve their Clayton Wood training base.

The Potters are hoping to achieve Category One status in the Premier League-driven Elite Player Performance Plan (EPPP), announced in October 2011.

The work will be completed in three phases over three years and will see the installation of changing rooms and offices for various staff.

A medical centre, classrooms and an indoor pitch are also proposed.

Planning proposals were unveiled this week in conjunction with local residents in Trent Vale and Clayton.

"The club are firmly committed to achieving Category One status which will give us the best possible chance of developing our own players for the first team," Richard Smith, managing director of Stoke City Property Ltd, told the club's official website.

"We want to ensure we're up there with the top clubs so we can nurture the best young talent in Stoke-on-Trent and the surrounding areas, while also attracting the best young players who are available to us.

"We are well aware that failing to attain that ranking would have implications for the academy because other Category One clubs could cherry pick our players."

Clubs granted Category One EPPP status will have to provide £2.325m in funding per year, and employ at least 18 full-time staff.

In return, they will be granted extra time to work with youth prospects, and must have a minimum of five hours' contact time with those players per week.

The plans sparked outrage in certain quarters when they were unveiled last year.

Under the new proposals, compensation to clubs whose players are taken on by Premier League academies will be drastically diminished.

In the past, clubs were often remunerated with seven-figure sums, but under EPPP they will receive a maximum of £40,000 per year of development.