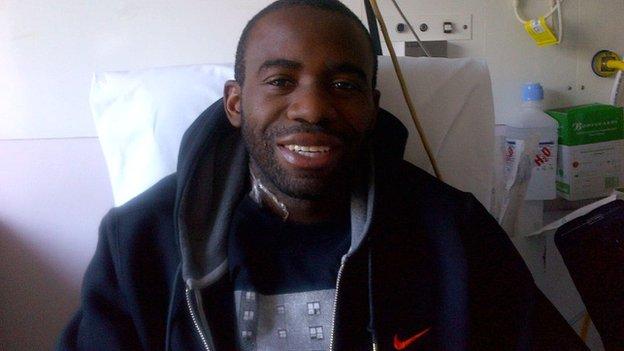 Fabrice Muamba has walked for the first time since suffering a cardiac arrest as his condition continues to improve.

"He's taking steps, talking and has that big smile we love to see. He is progressing the right way," said Owen Coyle, the player's manager at Bolton.

Muamba, who turns 24 on Friday, remains in intensive care at a London hospital.

"He has done some short periods of walking down the corridor he is in as part of the unit, staying in intensive care," added Coyle.

The midfielder collapsed on the White Hart Lane pitch during the quarter-final match on 17 March and was given 15 defibrillator shocks before he reached hospital.

Muamba, whose family posted the first public picture of him on Twitter from his hospital room last week, has received thousands of get-well messages from players, officials and supporters across the world.

Bolton chairman Phil Gartside and club doctor Jonathan Tobin have visited the player at the London Chest Hospital this week.

Coyle said: "A couple of players have been sending him messages and we are keeping in touch. It has been great to see that smile and he continues to get better.

"We have to stress that he still has a long way to go, but the improvement has been remarkable and long may that continue."