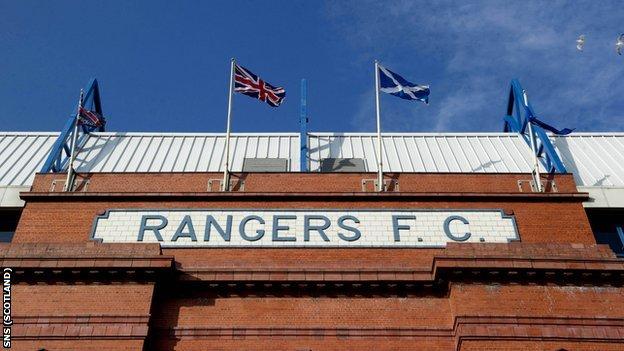 Rangers' administrators will be "considering further" three of the four bids submitted for the club.

The Blue Knights consortium made its "best and final" offer on Wednesday, along with parties from Germany, the United States and Singapore.

BBC Scotland believes the German bid is no longer in the running.

And David Whitehouse of Duff & Phelps said that he believes Rangers can exit administration via a company voluntary arrangement (CVA).

"We can now see light at the end of the tunnel," said Whitehouse.

"We have had a number of discussions with the interested parties and have stressed the benefits to them of engaging openly with the club's fanbase.

"While we cannot be precise on timescale, exit from administration does look achievable by the end of the season. We also hope to announce next week acceptance of one bid, which would then be subject to a period of due diligence and exclusivity.

"Most importantly, following the bidding process, we believe that the most likely exit from administration will be the successful implementation of a CVA."

On the same day administrators estimated that the club's total debts could top £134m, Whitehouse added: "This is an extremely complicated case.

"Not least because of the requirements to meet insolvency legislation, the rules of the various football authorities and the contractual requirements of key business partners of the club.

As administrators, we would be in breach of our statutory duties if we rejected out of hand any legitimate proposal that asserted to secure the future of the club

"It is, however, appropriate that we once again set out our position in relation to the manner in which we are seeking to achieve an exit from administration.

"The first objective of administration is to achieve the survival of the company as a going concern.

"In relation to the football club this can only be achieved via the exit from administration through a CVA. A CVA is a process by which creditors are presented with a proposal to deal with the legacy debts of the company.

"Creditors in turn vote upon those proposals and therefore there is a requirement for a CVA to meet the commercial needs of creditors.

"It is, therefore, essential that any CVA proposal is commercially acceptable to the general body of creditors. The ability of the company to exit through a CVA process is, therefore, dependent in part, on the level of offers submitted for the business and is in the gift of the potential purchasers to deliver.

"As stated, we believe this can be achieved.

"We would stress, however, that if a CVA could not be achieved, bidders have discussed with us the next best alternative being the sale of the business to a new legal entity which would continue to trade as Rangers Football Club.

A source close to the Singapore group has told BBC Scotland liquidation is not part of its plans for the club, while former director Murray has also made it clear that he is against that option.

On the subject of liquidation, Whitehouse explained: "While such an arrangement is not desirable in so far as it would change the corporate entity, i.e, the registration number of the limited company, and would leave the club facing European and domestic football penalties, it nevertheless could provide a platform to enable new and substantial investment to be made, which would in turn achieve the long term stability and viability of the business.

"As administrators, we would be in breach of our statutory duties if we rejected out of hand any legitimate proposal that asserted to secure the future of the club.

"This solution is not our primary objective nor our preferred option, however we would ask fans to understand that delivery of a CVA can only be achieved if purchasers are prepared to offer enough to provide a return to creditors at a commercially acceptable level."

Brian Kennedy, who had an earlier bid rejected, has said he could return to the table.

The Sale Sharks owner does not want to bid against the Blue Knights, but could renew his interest if Murray's group is unsuccessful in its attempts to take over the club.