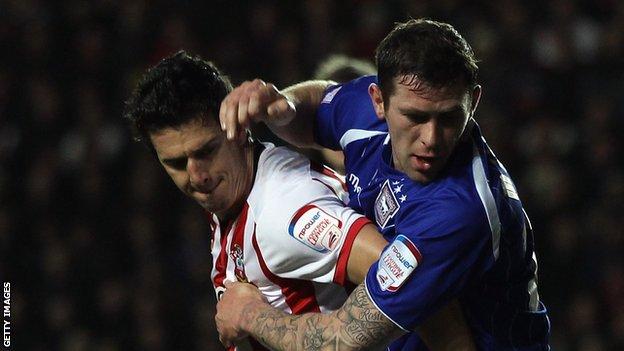 Ipswich Town boss Paul Jewell has said he will attempt to sign Celtic striker Daryl Murphy permanently in the summer.

The 29-year-old, who has a year to run on his deal at Celtic Park, has scored four times during a loan spell at Town.

"I spoke to his agent on Wednesday. We'd like to keep Daryl here but that will depend an awful lot on Celtic," Jewell told BBC Radio Suffolk.

"I think he'd like to stay. But we'd have to keep an eye on it and see if Celtic can help us with that one."

Republic of Ireland international Murphy, who is in his second Portman Road spell, after an 18-game stint on loan from Sunderland in 2010, has already stated he would be keen to return to Suffolk next season.

Meanwhile, midfielder Grant Leadbitter and defender Tommy Smith, whose deals are up in the summer, have both been offered new contracts.

Town have tried to tie down Leadbitter all season but talks have been fruitless so far.

"I think the owner has spoken to Grant's agent and made him an offer," said Jewell.

"It might be that there's a lot more talking to do yet but hopefully we can get something sorted out. We're going to make Tommy an offer as well.

"He's been unfortunate since I've been here because he's been in and out of the team. He showed great commitment when he went to New Zealand [in early March], came back on the Friday morning, trained and played against Bristol City the next day."