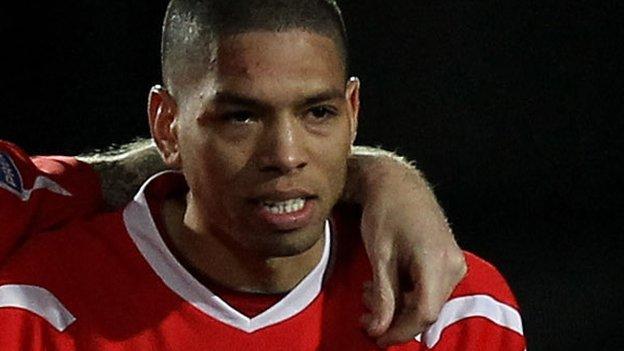 Peterborough boss Darren Ferguson has revealed his frustration with his own club's handling of the signing of Wrexham defender Nat Knight-Percival.

Posh director of football Barry Fry announced that Knight-Percival had agreed a pre-contract at London Road.

"Quite honestly I think it's really disrespectful to talk about a player like that," ex-Wrexham midfielder Ferguson told BBC Radio Cambridgeshire.

"It should never have happened and I'm slightly disappointed it has happened. We made a promise to Wrexham that we wouldn't let it be known until the season has finished.

"But I don't want to comment on it anymore."

Former Histon man Knight-Percival, who has made 43 appearances for the promotion-chasing Dragons this season, has been in talks with Wrexham over a new deal, but is yet to publicly state where his future lies.

Fry told the Peterborough Evening Telegraph earlier in the week: "We have signed Nat on a pre-contract and he will join us at the end of the current season.

"The manager went to watch Wrexham and Brighton in an FA Cup tie and liked what he saw of Nat."

Wrexham chief executive David Roberts hit back, saying: "We have a strict policy that we do not speak publicly about players who are under contract with another team.

"Sadly, we cannot control how other clubs conduct themselves in such situations."