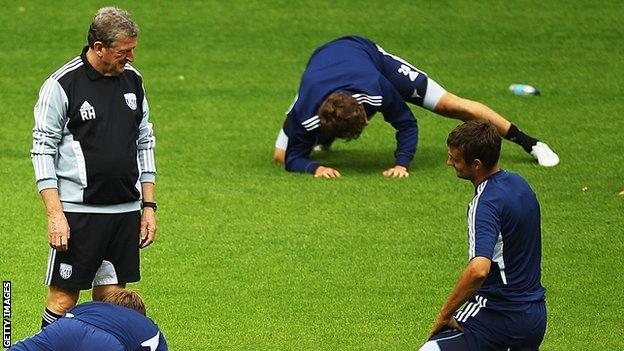 West Brom manager Roy Hodgson has hailed his club's decision to invest in their training facilities.

The Baggies announced last week that they will spend £2.5m on their academy to achieve Category One status under the Elite Player Performance Plan.

"It shows that the club intends on being a Premier League club for years to come," Hodgson told BBC WM.

"It shows that the club is aware that to do the job properly you have got to be producing some of your own talent."

As part of the proposal, the club will add to their coaching, medical, sports science, recruitment and operational staff.

In addition a full-size, floodlit, state-of-the-art artificial pitch will be installed, which will stage Academy training sessions and matches.

The plans also allow for the complete refurbishment of changing rooms for players, coaching staff and officials, as well as offices, classrooms and a parents' meeting room.

"It also shows that we are determined to become a big player here in the Midlands so that talented boys who have the choice of going to Midlands clubs will consider us very, very seriously," Hodgson continued.

"Not only for our infrastructure, but for our good coaching, good education, and [knowing] that if they come to us they will be well looked after and their chances of becoming a Premier League footballer will be higher than if they were to join our rivals."

Stoke City revealed similar plans last week and have pledged to spend £6m on their own facilities.