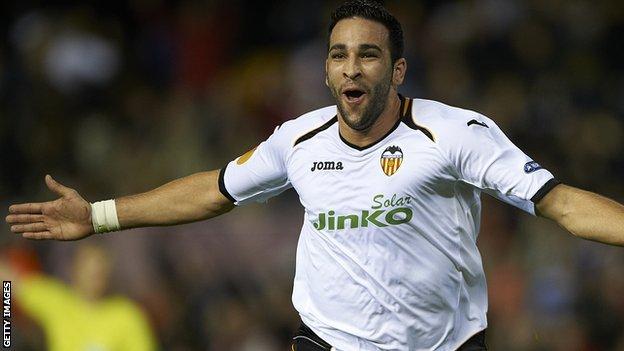 Atletico were 2-1 winners over Hannover 96 and went through 4-2 on aggregate.

Athletic Bilbao make up a trio of Spanish teams in the last four after a 2-2 draw with Schalke helped them to progress after a 4-2 first-leg win.

They will play Portugal's Sporting Lisbon who drew 1-1 at Metalist Kharkiv but edged through 3-2 on aggregate.

Sporting, conquerors of Manchester City, took the lead in their second leg tie in Ukraine when Ricky van Wolfswinkel headed in a Diego Capel cross but they survived a scare when Metalist almost hauled back the 3-1 aggregate deficit.

Jonathan Cristaldo latched on to a Mark Devic flick-on before cutting inside and powering in a shot to leave Metalist just a goal within drawing level and sending the tie into extra time.

The home side were given the perfect chance to do that when they earned a penalty, only for Cleiton Xavier to have his spot-kick saved by keeper Rui Patricio.

Sporting are unlikely to receive any similar let-offs when they play an Athletic Bilbao side who knocked out Manchester United before seeing off the challenge of German outfit Schalke.

Striker Klaas Jan Huntelaar was not closed down and used the space to drive in a shot to give Schalke hope of a comeback from a 4-2 first-leg deficit.

But Bilbao equalised on the night when Gomez Ibai surged in from left and curled a lovely dipping shot into the bottom corner.

Raul matched the quality of that strike, driving forward and powering a left-foot shot high into the Bilbao goal - but the Spanish side delivered an immediate riposte through a Markel Susaeta strike to restore their first-leg advantage and go through.

Performance of the night came from Valencia as they made light of a 2-1 first-leg defeat by AZ Alkmaar.

They had pace and purpose from the start and continually penetrated a poor Dutch defence, with an Adil Rami header and sidefooted effort at the far post quickly giving them the upper hand.

The Mestalla side pressed their advantage when forward Roberto Soldado crossed for midfielder Jordi Alba to slot in and Pablo Hernandez eased a shot in to round off a 4-0 second-leg victory.

Atletico Madrid, currently six points behind third-placed Valencia in La Liga, added to their 2-1 first-leg lead when Adrian Lopez wriggled his way past Hannover's defence and keeper before slotting home.

Mame Biram Diouf pulled one back for the German side before Radamel Falcao's spectacular late volley secured Atletico's semi-final spot.