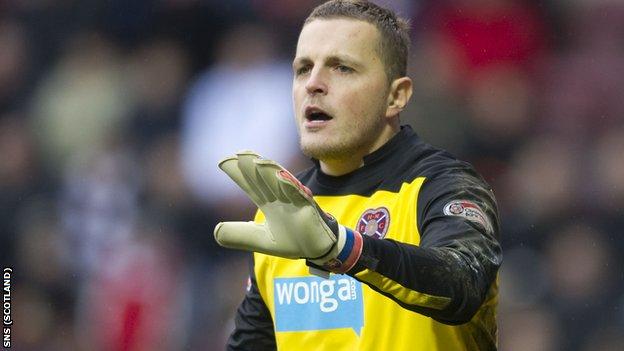 Goalkeeper Marian Kello has agreed an early release from Hearts, with his contract due to expire in the summer.

The 29-year-old Slovak has not played for the Tynecastle side since refusing a January transfer to Austria Vienna.

"I would like to take this opportunity to thank my team-mates and the Hearts supporters who have always made me feel so welcome," said Kello.

"I will always value my time at the club and wish them all the very best for the rest of the season."

Kello, who has been linked with Aston Villa in newspaper reports, has been at the Edinburgh club since agreeing an initial loan move from Lithuanian side Kaunas in August 2008 and was a stand-out performer last season.

Meanwhile, David Templeton could be back for Hearts' Scottish Cup semi-final against Celtic at Hampden next week, according to coach Gary Locke.

The Tynecastle winger has been out of action with a groin injury since 18 February.

"He has had a serious problem with a stomach/groin but he trained for a good four or five weeks with the physios and the story is he will probably start training on Monday and hopefully put himself in contention for the cup game," said Locke.

"I think it is a possibility (making the Celtic game).

"He is a fit lad, there is not a lot of fat about him and if he gets a good week's training then I am sure he will come into contention."