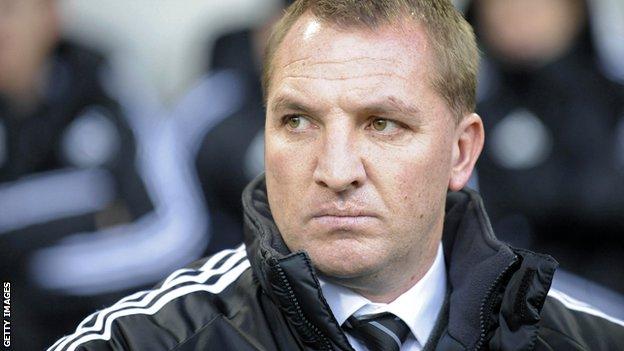 Swansea have impressed under Rodgers in their debut season in the Premier League, claiming a few notable scalps.

"The sad thing for Swansea fans is he'll be a target for big clubs in the summer if those jobs become available," said Savage.

Rodgers is a leading contender to replace Harry Redknapp should the Tottenham Hotspur boss become the next England manager.

Rodgers revealed he has a buy-out clause in the new three-and-a-half year deal he signed in February.

Swansea, who host Newcastle United on Good Friday, are 11th in the Premier League and have beaten Manchester City and Arsenal this season.

They have impressed many observers this season including former Leicester, Blackburn and Derby County midfielder Savage, now a BBC pundit.

"It's my job to watch football and I've watched Swansea a lot. Brendan Rodgers has got them playing so well," added Savage.

"We [former club Derby County] played against Swansea last year and we beat them at Pride Park. You had to work so hard to beat them.

"Everybody gives them plaudits even if they lose."

Club-record signing Graham, who arrived from Watford for a £3.5m fee in June 2011, had a slow start to life in south Wales but has gone on to contribute 12 goals in all competitions.

However the former Middlesbrough and Carlisle forward has not scored in six games since a double in the 3-2 home defeat to Norwich in mid-February.

But Dyer, who is set to return to the Swansea starting line-up against Newcastle, has no doubt Graham will soon be back among the goals.

"Strikers go through these patches where you don't score for a few games," said Dyer.

"Everyone doubted him at the start of the season but if you had watched him in training you would have had no doubt.

"If he gets the chance he will put it away, as he has done before. All strikers go through it, he is working hard and his finishing is on the highest level.

"He is from Newcastle so he is going to want to try and do his best and get on the scoresheet."