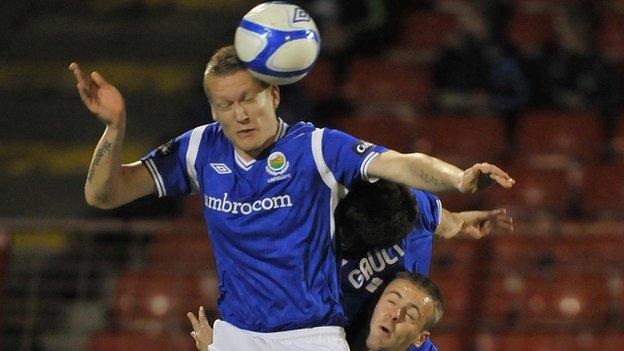 Linfield boss David Jeffrey wants his players to ignore title talk and concentrate on the Premiership clash with Portadown at Windsor Park.

The Blues will retain the Gibson Cup if they win the game after Cliftonville's defeat at Coleraine on Friday night.

"All we're thinking about is the game and nothing else," said Jeffrey.

Linfield have been boosted by David Armstrong signing a new two-year deal and Peter Thompson winning the Player of the Month award for March.

Jeffrey added that Aaron Burns is "taking some time" to consider the offer of a new a contract.

"This week in training, all we've been focused on is getting three points," Jeffrey told the club website.

"We know we're going to come up against a highly motivated Portadown side that has done superbly well this season.

"They are an extremely talented team. They have very skillful, technically gifted players and when you have big Ronnie in the opposite dug-out, you know what you are going to be up against it.

"Training this week has been first class. Attitude has been spot on."

At the other end of the table there's a relegation showdown between Dungannon Swifts and Carrick Rangers.

Carrick lie bottom and four points adrift of the Swifts ahead of the Stangmore Park game.

Crusaders defender Stephen McBride is suspended for the meeting with Glentoran at the Oval.

Glenavon will make the trip to New Grosvenor to take on a Lisburn Distillery side missing banned pair Andrew Hall and Mark Cooling.