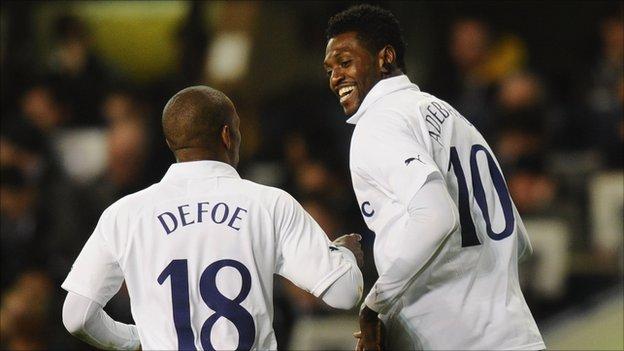 Tottenham manager Harry Redknapp does not know whether he will be allowed to keep on-loan striker Emmanuel Adebayor beyond the end of the season.

The Togolese joined Spurs on a season-long loan from parent club Manchester City in August and has scored 14 goals.

Redknapp is keen but cautious about his hopes of retaining the 28-year-old.

"He scored two goals last week against Swansea and he has been excellent, but whether it's possible to do a deal, I wouldn't be sure," he said.

"Manu is on loan at the moment and that's where we're at.

"The chairman will deal with (any negotiations) at the end of this season. I wouldn't have a clue whether (a permanent transfer) is a possibility or not."

Should Adebayor want to stay at Tottenham, the former Arsenal striker's reported wage packet of £170,000 a week may prove to be a big stumbling block in any negotiations.

Reports claim some of City's players want Adebayor back at the Etihad Stadium next season, but Redknapp doubts that will happen.

"His future doesn't seem to be there," Redknapp added. "He probably needs to move on.

"City have just gone through a dicky little spell recently but they have lots of good strikers there. If you look at the quality they have up front, they are full of top players."

The victory, and Arsenal's defeat at QPR last Saturday, means Spurs have a chance to move three points clear of their north London rivals if they win at Sunderland this weekend.