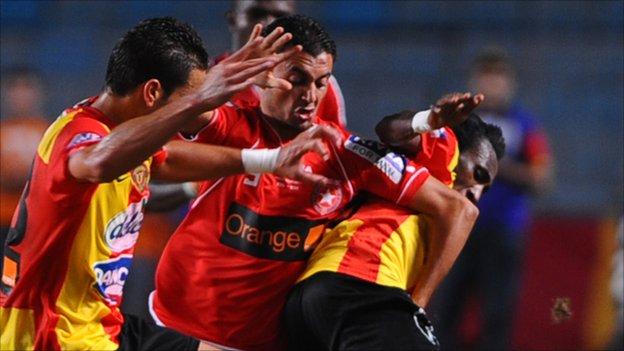 Former winners Etoile du Sahel survived a major scare in the African Champions League when needing a 98th-minute goal to knock out APR of Rwanda on Friday.

The 2007 champions were exiting on away goals until Lassad Jaziri made it 3-2 on the day, and on aggregate.

Title-holders Esperance booked their place in the second round when beating Brikama United 3-1.

The Tunisians won through 4-2 against the Gambians, despite Brikama taking an unexpected first-half lead in Tunis.

But it was the game in Sousse that had all the drama, with Etoile trailing APR 2-1 with two minutes of normal time left.

Hammed Namouchi equalised in the 89th minute before Papy Faty, who had given APR a 2-1 lead seven minutes earlier, was sent off as a melee ensued between players from both sides.

In the twelve minutes of stoppage time that followed, Jaziri scored his second of the game with a fine lob to keep the Tunisians in the competition.

Across the country in Tunis, Brikama United may have thought an upset of their own was on the cards when Modo Lamine Sodo gave a club founded just nine years ago the lead against the African champions.

At that point, the Gambians were 2-1 ahead on aggregate - but Wajdi Bouazzi managed to level the scores when equalising after 40 minutes.

In the second half, Yannick N'djeng saw his penalty saved before Karim Aouadhi's 72nd-minute goal finally killed off the visitors' valiant efforts.

Esperance will play either Dynamos of Zimbabwe or Mozambique's Muculmana de Maputo in the third round, while Etoile will face Ivorians Amadou Diallo.

At home in Abidjan, Amadou Diallo beat JSM Bejaia of Algeria 3-0 on Saturday to qualify as 5-1 aggregate winners.