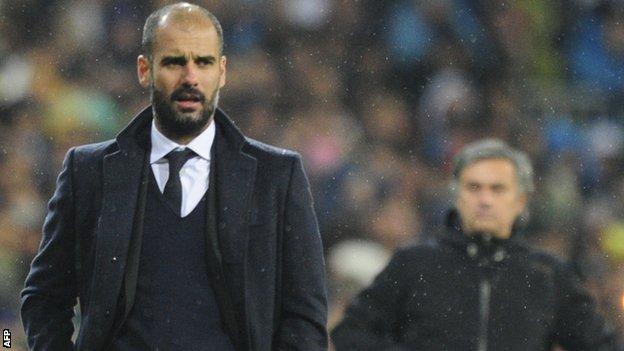 Barcelona coach Pep Guardiola has played down claims by Jose Mourinho that the Catalan club are "super-favourites" to beat Chelsea in the Champions League semi-finals.

Mourinho's Real Madrid side face Bayern Munich in the other semi-final.

Guardiola said: "I'm thankful for the confidence he has in us but all four teams in the semi-finals have a chance.

"Chelsea are a team of great experience with fantastic players. It is one of the great teams in Europe."

He added: "It is a team with history in recent years in English football. Competing in the Champions League, they have always been there and have shown themselves capable.

"It is clear that in the semi-finals of the Champions League there is no rival that you can think will be easy."

Mourinho guided his team into the last four by defeating Apoel Nicosia, 8-2 on aggregate on Wednesday night, and then virtually wrote off the chances of meeting his former club in next month's final in Munich.

Former Chelsea manager Mourinho had said: "Barcelona aren't the favourites, they are super-favourites.

"Let me be honest, I don't think the final will be a Real Madrid-Chelsea final. It could be Bayern v Barcelona - I just don't think it will be Real Madrid v Chelsea and we know why."