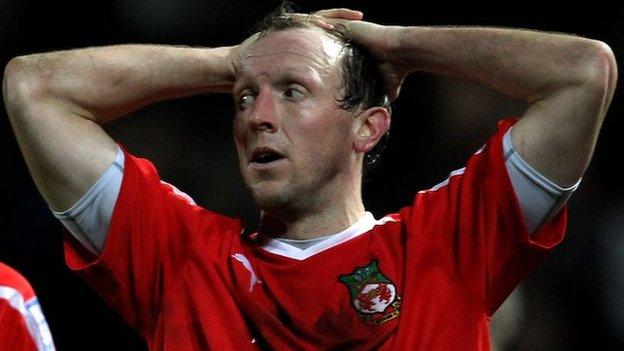 Andy Morrell has conceded the pressure could be "telling" on Wrexham as his side can allow Fleetwood to seal promotion in Tuesday's top two clash.

Wrexham dropped points for the third time in four Blue Square Bet Premier games in their .

on Saturday and if they defeat Wrexham on Tuesday, The Trawlermen will win the Conference title and Football League promotion.

"We've given it to them on a plate, there's their incentive," said Morrell.

"The pressure is on. I don't know if that pressure is telling on a few of the lads because it is hard, it is difficult to push over that line and get us out of the division.

"There are some young lads in that team but it is not often you are in a position to win promotion.

"But we're the second best team in this league by 18 points and we've raised our expectations a lot it is how we manage that now. So we'll go to Fleetwood and try and win."

Second-placed Wrexham trail Fleetwood by 11 points and the Welsh club have five games remaining, while Fleetwood have four to go, as the Racecourse side hope for a return to the Football League after a four-year absence.

The Dragons had led the Blue Square Bet Premier table until January but Fleetwood's incredible unbeaten run stretching back to 11 October has ensured they are now favourites for the title and one automatic promotion spot to the Football League.

Wrexham look set for a second successive season in the play-offs but Morrell wants to regain a little winning momentum before of the end-of-season showpiece.

"This will be good learning curve for some," said Dragons manager Morrell.

"We have to return to what we were like over Christmas in our next five games. And we need everyone right behind us."