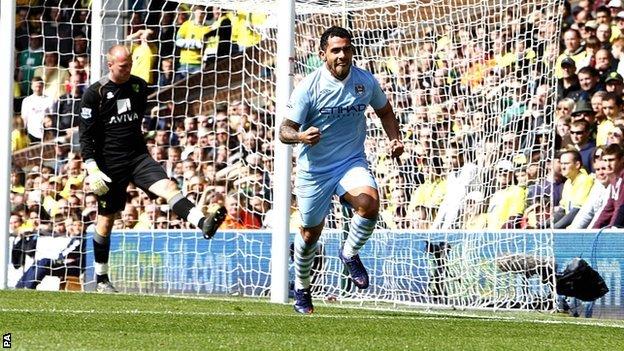 But Tevez boosted the lead with a header and Aguero's solo effort added the gloss before Tevez rounded Ruddy to complete his hat-trick and Adam Johnson slotted in from close range.

The Argentine celebrated his third strike with a golf swing, perhaps mocking those who questioned his desire during his unauthorised leave of absence in his home country where he was pictured on the golf course.

But after a fractious period in his Manchester City career, his performance and the result showed that his team's title challenge was back on track.

For all boss Roberto Mancini's claims that his team have no chance of overtaking rivals United, who host Aston Villa on Sunday, the Italian's players showed they have not given up.

Aguero, who was also a menace and scored two fine goals, came inches away from matching his countryman's tally when he hit the post late on.

It was a deadly exhibition of finishing from the front two, and City look to have recovered their former fluency, but the scoreline was harsh on Norwich, who pressured the visitors early on, and tested them again after reducing the deficit to 2-1.

Four goals in the last 17 minutes swept their challenge aside to give Manchester City their first away league win since 12 February but before the visitors could take control, they had to withstand an early barrage from the in-form Canaries.

The Manchester City players had already made their feelings known to referee Chris Foy when Tevez was booked for diving, after he appeared to be caught by Ryan Bennett.

But soon after, Tevez's recent rehabilitation continued when he was fed down the right by a re-energised David Silva and struck a swerving shot that beat Ruddy at his near post.

The second goal was a gem as Aguero supplied Tevez in the inside left channel and then picked up his fellow countryman's backheel to fire past Ruddy.

That strike knocked the wind out of Norwich, with Grant Holt's effort on the half-turn the only significant return before the break.

In 2005, Norwich director Delia Smith issued her infamous "Let's be 'aving you" rallying cry during the interval in a Premiership game between these two teams. But the Canaries - who had won seven of their previous eight home league games - are a different proposition under Lambert, and the Scot settled for a double substitution to rouse his side.

The move quickly brought reward when one of the replacements, Surman, steered the ball in after Hart had punched Adam Drury's cross clear.

And the other replacement, Wes Hoolahan, helped improve Norwich's midfield as they supported the advanced Aaron Wilbraham.

But as Norwich pressed, the visitors almost caught them on the break twice and Yaya Toure's arrival from the bench proved pivotal as three goals then flew in during the space of seven minutes.

It fell to another substitute Johnson to complete the rout after a sweeping move, and with City to face bottom-of-the-table Wolves before they play Manchester United at Etihad Stadium on 30 April, their confidence could by then be sky high.

Norwich boss Paul Lambert: "I think for 70-odd minutes we were well in the game. At 2-1 we looked really good and in the second half we played really well but if you're losing four goals in that space of time it was poor from our point of view. The effort was there in abundance, as it always is, but maybe the scoreline was severe.

"You can't legislate for losing three goals in seven minutes, and we'll learn from it. You take your medicine and you bounce back. Their strike force is incredible, the first two goals were world class. [Our] team have done brilliant, I can't be too harsh on them."