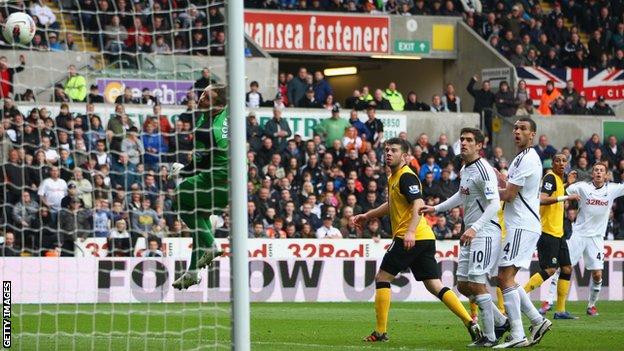 Blackburn's survival hopes took a massive nosedive with a comprehensive defeat at the hands of classy Swansea.

Gylfi Sigurdsson opened the scoring for the home side, curling in a delightful left-footed effort.

Scott Sinclair pounced on a Scott Dann error to supply Danny Graham, who teed up Nathan Dyer for the second.

Blackburn really needed something today. The only thing they got was an absolute hiding. Blackburn are in a whole lot of trouble. While it was Swansea's day, Blackburn's days as a Premier League team may be coming to an end. Four games to go - you have to think they'll need to win them all.

David Dunn spurned chances for Rovers but their fate was sealed when Dann knocked the ball into his own net after Sigurdsson had struck the post.

Mathematically both of these sides - who were each coming off the back of a four-game losing run - can still go down. Realistically only one will.

That fate is becoming more likely for Steve Kean's Rovers, who performed like a club resigned to relegation, and remain three points adrift of safety.

Swansea on the other hand managed to recapture their trademark passing style that has drawn so many plaudits this season, but had been notably absent in recent weeks.

It was Sigurdsson, having already troubled Robinson with a swerving effort, who put the Swans in the ascendancy.

The Iceland international collected Joe Allen's cross on the corner of the penalty area, shifted the ball on to his left foot and swung it over former England keeper Paul Robinson and into the net.

It was a finish that will have strengthened the calls for Sigurdsson to turn his loan move from German side Hoffenheim into a permanent switch in the summer.

It was also the cue for Blackburn to hit the self-destruct button.

Steven Nzonzi was at it first, sending a blind pass into his own area which only found Graham, who forced a smart save from Robinson down to his left.

The last time Blackburn made the trip to Swansea was is in October 1983. It was a clash in the old Division Two, which Rovers won 1-0

Then Dann made a hash of clearing Neil Taylor's cross and the ball found its way to Sinclair. He switched it across the six-yard box to Graham, who slipped it to Dyer, and although he sliced his shot the ball spun past Robinson.

Dann was once again the Blackburn fall guy for Swansea's third.

Sinclair left three Rovers defenders for dead on his way into the area and slipped in Sigurdsson. The Icelander contrived to hit the post from two yards out but his shot ricocheted back off the hapless Dann and into the net.

Blackburn's limited response was led by Dunn. The midfielder hit a half-volley into the ground when he should have done better, nodded over from six yards out and rattled a post with a 20-yard drive.

But it could have been worse for the visitors, with Robinson making impressive stops from Sinclair and substitute Leroy Lita.

For Rovers, with their outlook now even more bleak than before the game started, the target must be to take every point they can from their last four games, which include trips to Tottenham and Chelsea.

"I thought the boys were outstanding. We had a real hunger. I wasn't worried in the last four games apart from QPR. The three games prior we played well but just didn't get results.

"Today, to keep a cleansheet and score three goals against a team capable of scoring many goals was good.

"Our home form in the last 18 months has been incredible and that is massively down to the supporters. You sensed how much they enjoyed that performance."

"It was tough afternoon. At 0-0 I thought we contained them well.

"We thought the first goal there was potentially a foul in the build-up. But no doubt it's a fantastic finish."