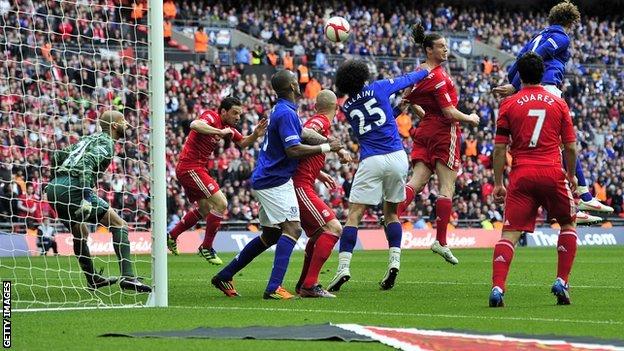 Andy Carroll's late header sent Liverpool through to the FA Cup final as they came from behind to beat Everton at Wembley.

Nikica Jelavic took advantage of a mix-up between Jamie Carragher and Daniel Agger to give Everton the lead midway through the first half - but an Everton defensive error just after the hour gave the Reds a route back to their second major Wembley final this season.

Sylvain Distin's backpass never carried the weight to reach Everton keeper Tim Howard and Luis Suarez was only too happy to take advantage to race through and score.

And with three minutes left Carroll - who had missed the easiest of chances early in the second half - glanced substitute Craig Bellamy's free-kick past Howard to give Liverpool the chance to add the FA Cup to the Carling Cup they won on penalties against Cardiff.

Manager Kenny Dalglish has had his problems in the Premier League, with director of football Damien Comolli paying the price when he left the club on Thursday, but cup competitions have sustained Liverpool's season after heavy investment last summer.

And if Liverpool can claim another domestic trophy when they face either Chelsea or Tottenham at Wembley next month it will provide an answer to the Scot's critics.

For Everton manager David Moyes, who gave the dejected Distin a consoling pat as he left the Wembley pitch, this will be a moment of bitter disappointment as his side failed to produce the form they have displayed in recent weeks.

Liverpool were forced to field third-choice keeper Brad Jones with Pepe Reina and Alex Doni suspended but - the dangerous Jelavic apart - Everton were never able to apply enough pressure to test the Australian.

The minute's silence in memory of the victims of the Hillsborough disaster was perfectly observed before the match began, before both sides had early opportunities to gain the advantage.

Carroll found space in the Everton area to set up Jay Spearing, who took his time but fired well off target from 15 yards.

Everton's response was a free-kick from Leighton Baines that landed on the roof the net after Agger had clumsily hauled Jelavic to the ground.

It was the Blues who went ahead after 24 minutes thanks to a calamitous piece of defending from Liverpool involving Agger and Carragher.

The pair hesitated over a routine clearance, forcing Carragher to lash the ball against Tim Cahill and into the path of Jelavic, who scored with the composure that has become his trademark since his January move from Rangers.

Liverpool needed to move through the gears but Carroll was guilty of an astonishing miss just moments into the second half. The striker only appeared to have to make contact with Stewart Downing's cross to score but headed wide, to the obvious anguish of Dalglish.

Dalglish's side were applying most of the pressure, but it still took another defensive gift for Suarez to equalise after 62 minutes. Distin's backpass fell well short of Howard, leaving the Uruguayan to race clear and finish under pressure from John Heitinga.

Everton were deflated after the concession of such a cheap goal and Carroll almost put Liverpool ahead with 13 minutes left, pulling a shot inches wide from 18 yards.

Jelavic had been a constant threat and he was again the danger man with an angled drive that flew into the side-netting before a goalmouth scramble ended with Carroll again unable to apply the finishing touch.

Carroll's persistence was finally rewarded in the closing minutes. Everton substitute Seamus Coleman's rash challenge on Steven Gerrard was heavily punished as Carroll, with his back to goal, deflected a header beyond Howard to seal another Wembley appearance for Liverpool.