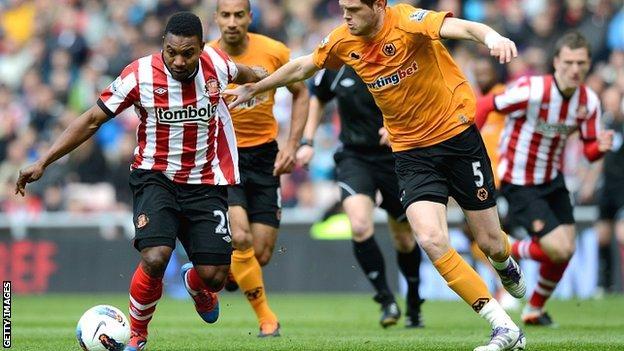 Wolves halted a run of seven defeats with a well-earned draw at the Stadium of Light, but are five points adrift at the foot of the Premier League table.

Sunderland had the better of a tame first half, James McClean firing into the side netting after a neat move.

But the Black Cats created little after the break and Wolves looked likelier winners, Steven Fletcher's header smartly kept out by Simon Mignolet.

The stalemate meant a first clean sheet for Wolves in 31 matches.

How Terry Connor would have wished for this kind of endeavour from his team - and indifferent display from his opponents -throughout his brief tenure.

When he was appointed manager until the end of season in late February with 13 matches to play, Wolves were one of three clubs on 21 points and had Bolton and Wigan below them.

The team fought back valiantly from two goals down to claim a creditable draw at Newcastle in Connor's opening match but they have been bottom of the table since 10 March, when they suffered a second 5-0 reverse within a fortnight.

They might not have looked to this fixture with any relish, but history was on their side, with six wins in nine matches at Sunderland.

In addition Martin O'Neill's side, who amassed 23 points from the first 30 available in his reign, had claimed only nine from their last nine matches.

Wolves certainly acquitted themselves admirably, without looking much like converting their possession into goals, in a first half devoid of incisiveness from either side in key areas.

This was only the second time in 75 Premier League matches that Wolves have been involved in a goalless draw.

McClean shot the wrong side of the left-hand upright after the best move of the opening period, when Stephane Sessegnon found him in space on the left edge of the area.

Sunderland were more assured going forward but were largely restricted to long-range efforts, Sessegnon forcing a save from Wayne Hennessey and Phil Bardsley firing wide from 30 yards.

Sessegnon began the second half in lively fashion and looked likely to inspire his side to victory, but he could not sustain his influence.

Instead a rare Wolves threat on goal saw 18-year-old Anthony Forde test Mignolet low at his near post with a 20-yard drive.

Wolves then fashioned an even better opportunity when Sylvan Ebanks-Blake played a neat one-two with Fletcher but lashed wide from 15 yards.

With the home supporters increasingly exasperated by their side's inability to break down Wolves, it was the visitors who went close again as Fletcher's header from six yards, from a cross by substitute Matt Jarvis, was pushed out by Mignolet.

Given the 73 goals already conceded by Wolves this term there was always the possibility of a late blow and McClean almost provided it when he ghosted in with a close-range diving header from Craig Gardner's cross.

But Hennessey kept the ball out with his legs and his team have a mathematical chance of safety to take into their next match at home to Manchester City next weekend.

"We didn't play well enough for prolonged periods, now and again we threatened but not enough for the victory and to please everyone.

"We knew it would be a difficult game, there is a still a good spirit about Wolves.

"It's been a heroic effort by the players but we looked tired today, and didn't keep possession for long enough."

"We thoroughly deserved the point and possibly should have nicked it.

"We defended really well, attacked with purpose and should have scored.

"It's what we've been working towards, it was nice we got some reward for a good defensive display.

"Things seem to go against you when you're down at the bottom but the lads have kept going and we'll keep going until the end."