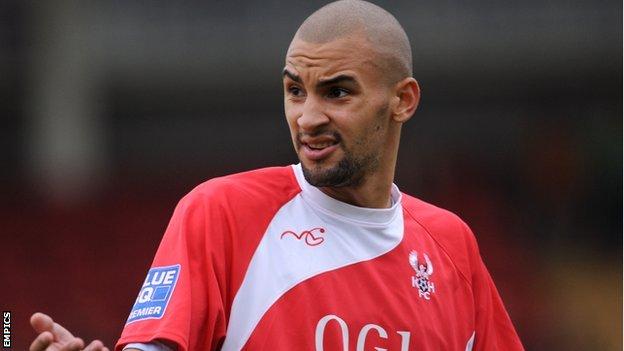 Ben Ford fired the Poppies into the lead from 12 yards before Wright levelled from the spot, after Anthony Malbon was brought down by Jered Ifil.

Wright then fired in his fifth goal in two games from the edge of the box.

Malbon made it 3-1 with a close-range shot before Ryan Rowe, Luke Jones and Mike Williams all headed in.

Victory means Steve Burr's side are now fourth in the Blue Square Bet Premier, four points above sixth-placed Southport and five clear of Luton, who have two games in hand.

But the Harriers now travel to Kenilworth Road next Saturday to face a crunch clash against play-off rivals Luton, before their final game at home to Mansfield at Aggborough on 28 April.

"We've worked hard over the last few weeks to get into the position, so it was nice to win.

"That was a bit more comfortable, but we were slow out of the traps.

"In the second half, I thought that was more like us. We were on the front foot and there were some good goals there as well."

"First half we were in the game and looked good but then shot ourselves in the foot with the penalty. From there on in it was red arrows - we were getting overrun everywhere.

"Everything they seemed to hit went in. They had decent substitutes who could come on and that was the difference

"Once they had gone three up the lads' heads have dropped and you're looking round for characters and we didn't have that. And that probably sums the season up in general."