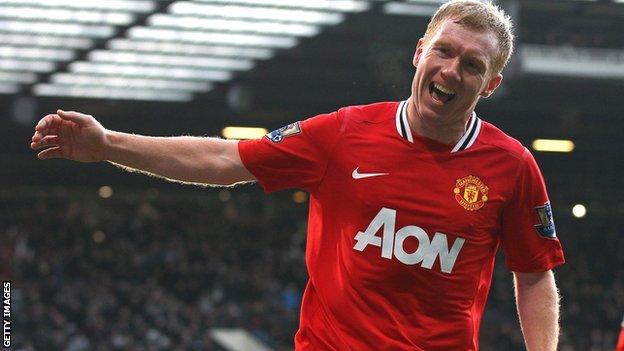 Manchester United midfielder Paul Scholes says coaching does not come close to the thrill of a Premier League title fight with Manchester City.

Scholes abandoned retirement in January and his return to action appears to have spurred United into life.

Sir Alex Ferguson's men have claimed 31 points from a possible 33 to establish a five-point lead over City with seven games remaining.

"The coaching was OK but it wasn't like playing," the 37-year-old told MUTV.

"I was still coming in every day and seeing players. It was difficult to adjust, I admit that.

"I really missed the playing side up until Christmas, when I went to see the manager."

Scholes has 10 Premier League winners' medals in his collection already, but insists he is just as desperate to hold off City as he would have as a rookie.

"You would have snatched someone's hand off for this position a couple of months ago," Scholes added.

"We have put ourselves in a decent position but there is still a long way to go."

However, Scholes is taking nothing for granted, this despite United's current advantage heading into a potentially pivotal couple of matches when Ferguson's men entertain QPR just before City kick off at Arsenal on Sunday.

"We are going up against a very good team in City. They have had a fantastic season and they have a great squad of players that is capable of beating anybody.

"But with this five-point lead we just have to concentrate on ourselves."