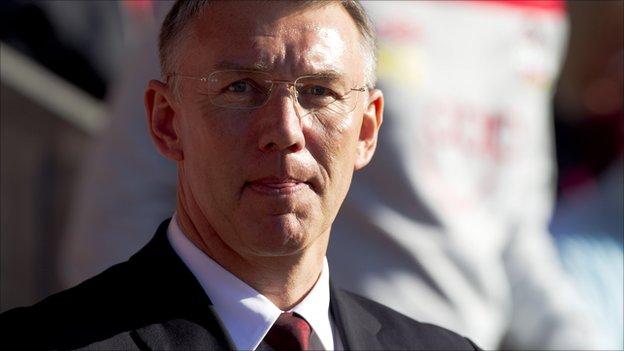 Southampton manager Nigel Adkins insisted it was one point gained after seeing his side concede an injury-time equaliser to Portsmouth on Saturday.

And Adkins insisted his side are still on course for promotion after moving back to the top of the Championship.

"It was one point gained," Adkins told BBC Sport.

"It put us top of the league and that's what it's about. I said before the game it's a six game league, one game is now out the way and there's five to go."

The draw moved the Saints above Reading on goal difference, however they would have been two points clear had they not twice conceded the lead to their South Coast rivals.

Billy Sharp looked to have earned Saints all three points when he poked home in the 89th minute, before David Norris's injury-time leveller.

Saints will look for a return to winning ways at Crystal Palace on Monday and Adkins has backed his side to bounce back despite his players looking despondent after the game.

"It is strange to see that when a team has just gone back top of the league," he said. "The players will get well reminded of that on Sunday.

"I think it underlines how passionate the players and management are.

"We were so near but for a very, very good strike from their player at the end. We got a share of the spoils and one point, not no points.

"We were not defeated and it puts us back top of the league and the supporters were able to sing that again at the end of the game."

The Saints play title rivals Reading on Friday, while West Ham are still in with a chance of promotion.

Asked if he thought his side would be in the Premier League next season, Adkins said: "Yes. We are taking one game at a time now.

"We've led the division for a long period and we go back top of the league. We did it all last season, we'll do it all this season."