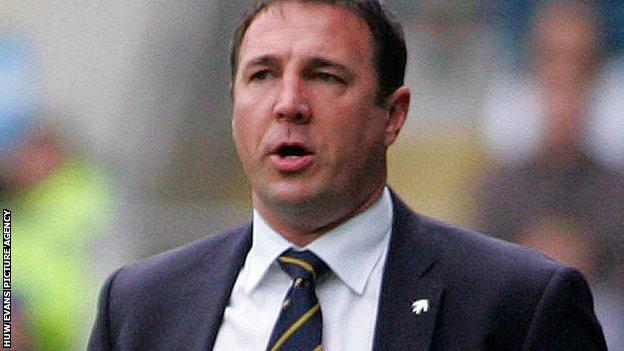 Cardiff City manager Malky Mackay has described his side's 2-0 victory at Middlesbrough in the Championship as a "huge" win.

The Bluebirds secured only their second win in 11 matches following first-half goals from Ben Turner and Joe Mason at the Riverside.

But despite returning to the play-off places Mackay says there is still plenty of work ahead of his side.

"There's a lot of points still to play for," Mackay said.

"There's a lot of clubs with a lot of work still to do. We're delighted to be among them."

Mackay said Cardiff were fully deserving of victory over promotion rivals Middlesbrough but felt his side should have added to their two first-half goals.

"[We're] delighted to have come up here to a promotion rival and a good team who were always going to be difficult to play against and come away with a clean sheet," said Mackay.

"[We scored] two good goals and on another day we could have scored more. I felt we were real good value for it.

"I thought we caused problems in the channels and Joe [Mason] right on half time had a one on one with the goalkeeper, who just had a hand to it before it creeps over the line to make it three.

"I thought we kept the ball [and] passed the ball well in the first-half.

"We certainly could have had a couple of goals in the second half. If we'd just been a little bit more careful in possession we'd have made it easier for ourselves."

Mackay felt Middlesbrough should have been reduced to ten men during the opening minutes after striker Kenny Miller was hauled down by goalkeeper Jason Steele.

Miller was forced off the field with a knee injury while Steele and Middlesbrough escaped any form of punishment from referee Kevin Friend.

"I think it was a real poor decision," said Mackay. "Kenny goes through [and] just gets to the ball before the goalkeeper.

"The goalie cleans him out [and] puts him up in the air and he's [Miller] got a bad knee injury at the moment and is limping about.

"They didn't have a goalkeeper on the bench and I'm sure that would definitely have affected them."