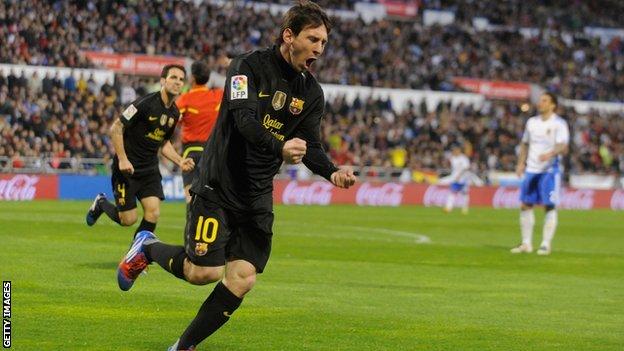 Barcelona forward Lionel Messi has become the first European top-flight player in almost 40 years to score 60 goals in a season.

The Argentine scored two goals in the 4-1 La Liga win over Real Zaragoza on Saturday, as they cut the gap on table topping Real Madrid to three points.

The 24-year-old is now seven goals behind Gerd Muller's all-time record for goals in a season.

The German legend netted 67 times for Bayern Munich in the 1972-73 campaign.

Barcelona were given an early scare at La Romareda, when the Aragonese side took the lead on the half-hour mark through Carlos Aranda's goal.

However, after Carles Puyol levelled matters in the 36th minute, Messi made it 2-1 to Barcelona three minutes later with a finish from 15 yards from an Alexis Sanchez pass.

His second came from the penalty spot with four minutes of the game remaining, and Pedro completed the scoring for Barcelona with a fourth goal in the final minute.

Messi has scored 38 goals in La Liga this season, and a further 14 in the Champions League, including five in the last 16 second leg win over Bayer Leverkusen in March.

Messi has also netted twice in the Copa del Rey, three times in the Supercopa, one in the Uefa Super Cup and two in the Club World Cup.