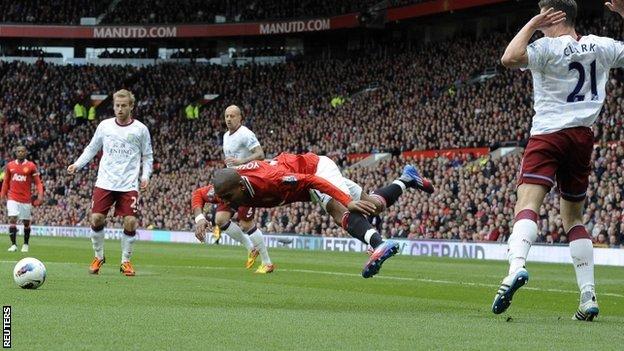 Manchester United re-established a five-point lead over Manchester City at the top of the Premier League but their victory over Aston Villa was aided by another controversial penalty.

Ashley Young, who won a spot-kick last week against QPR, was involved again, adjudged to be tripped by Ciaran Clark.

Contact between the pair was minimal but Wayne Rooney converted before Danny Welbeck made it 2-0 at the back post.

Villa improved after the break but Rooney and Nani sealed victory.

United were the superior team, especially in the first half, and the win also cut Manchester City's goal difference advantage to four goals.

But questions will be asked of Young, after Clark appeared to pull his foot away from the winger.

Young's former team-mates failed to improve a wretched record against United, which now extends to one win in 31 games.

More importantly, they remain just six points above the relegation zone but they will look at games against Sunderland, Bolton and West Brom as a better chance of accruing points than a trip to Old Trafford.

For United, victory was a perfect response after losing at Wigan on Wednesday and they were not put under any sustained pressure, hard as Villa fought.

Before the spot-kick controversy, Andreas Weimann had tested David de Gea and Clark almost made amends for his transgression later in the half when his header whistled wide.

Stephen Ireland's curling shot also went close, but United were well on top and could have extended their lead through efforts by Welbeck, Rooney and Paul Scholes.

Visiting keeper Shay Given had to be on top form to tip one Welbeck shot over, and he was severely let down by his defence for United's second.

Patrice Evra overlapped on the left and although his low cross was delivered into a dangerous area, it was well within the reach of James Collins and Nathan Baker, who inexplicably chose to leave it allowing Welbeck to slide in at the back post.

Scholes was once again the dictator in midfield, having being left out of the defeat by Wigan.

But the 37-year-old was booked for an ugly tackle on Gabriel Agbonlahor early in the second half, as Villa attempted to impose themselves on the game.

They had some success in stemming the flow towards their goal and Emile Heskey, who replaced the injured Clark, had a header tipped over by De Gea, while Nathan Baker also headed inches wide from a corner.

McLeish may take a dim view of the first goal, but Villa can have few complaints about the result - if there were any doubts about the direction of the game, Rooney made sure when he tucked in Antonio Valencia's cutback for his 32nd goal of the season.

And Nani came on to boost United's goal total when he scored from close range.

Sir Alex Ferguson's team now host Everton before they travel to Etihad Stadium to face City, where - following this result - victory could secure them their 20th top-flight title.