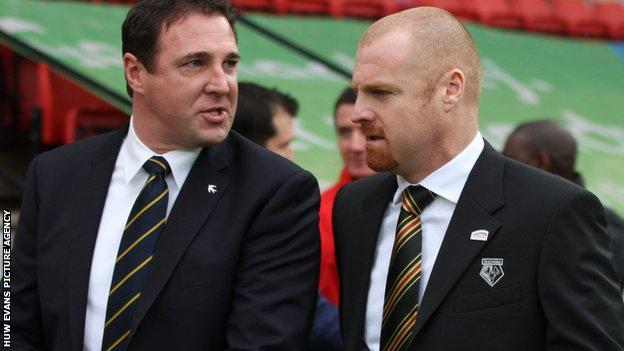 Mackay left Watford to join the Bluebirds in June 2011 and assistant Dyche was appointed as his replacement at Vicarage Road.

Both men are now in charge of sides who have play-off aspirations as Cardiff are sixth and Watford currently 13th.

Mackay had wanted Dyche to follow him to Cardiff when he was appointed Dave Jones' successor.

But the former Watford and Chesterfield defender decided to stay at Vicarage Road and Mackay believes the Hornets made a good choice in appointing him as manager.

"Sean was my assistant for a couple of years and we got on well," added Mackay.

"But I knew at some point Sean wanted to be a manager and I think he's done a great job there this season.

"Some key players have left the club [but] there's also been a lot of signings.

"A lot of players have arrived at the club [and] there's a bigger squad now than there certainly was in the past.

"Sean needed to strengthen and he's managed to do that. He's done well."

Mackay made over 50 appearances as a player at Watford and was appointed the club's first team coach in 2007.

The Bluebirds host Watford on Monday having returned to the Championship play-off places following a 2-0 win at Middlesbrough.

Watford's play-off hopes were dealt a blow on Good Friday when they suffered a 2-0 home defeat against Blackpool.

"It would be remiss and blasé and just say it's another game," said Mackay of Cardiff's match against Watford.

"I really enjoyed my time at Watford. I have fond memories of there as a player, coach and manager.

"It's a team I've got a lot of good feeling for and a club I really enjoyed my time there. It will be good to see a couple of friendly faces."