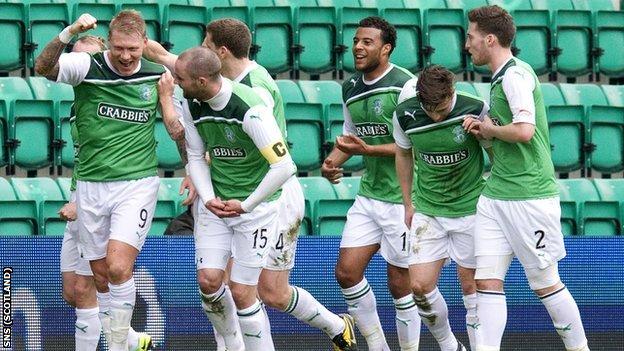 O'Connor's free-kick gave Hibs the lead against Motherwell, who battled back to claim a draw late in the match.

"He's got one last week and obviously one this week, so that's what we're hoping will happen in the last few weeks of the season," said Fenlon.

"He's so important because he's just a natural goalscorer."

"In fairness, when I came in initially, he played probably when he shouldn't have been playing with an injury," Fenlon told BBC Scotland.

"We've worked on his fitness and left him out and we're hoping that's going to reap the rewards.

"He's had a baby last week. He's in good form at the moment and he's looking a little bit sharper.

"His performance, particularly first-half, was excellent for us."

Another free-kick, by Pa Saikou Kujabi, was less accurate than O'Connor's effort, the left-back almost hitting the corner flag with a low, trundling shot.

"It's amazing to see," joked Fenlon. "We've been coming here and players have been getting stick for things and Pa nearly hits the corner flag and gets a round of applause after that. There is madness in football.

"It's probably a fair result," said Fenlon, whose side take on Aberdeen in Saturday's Scottish Cup semi-final.

"We're happy enough with the point. We would've loved to have got three, but a point is not bad for us.

"We're looking forward to next week. There's been a lot of pressure on the players over the last few months in relation to the relegation battle and we've given ourselves a little cushion. It's a good cushion to have, I'd rather be where we are than where they are.

"We won't sit on our laurels and think that's it done.

"We've got a massive game next Saturday and great occasion and hopefully we can get to a cup final."