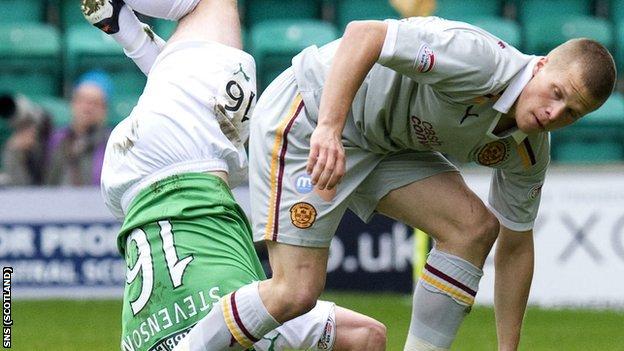 Motherwell manager Stuart McCall has urged his side not to be overly reliant on striker Henrik Ojamaa.

The Estonian has netted seven times since his January arrival but was substitute as Well battled back to claim a 1-1 draw at Easter Road.

"We can't just rely on him," McCall told BBC Scotland. "He was quiet.

"But, when we've got the likes of Murphy and Daley on the bench, we've always got belief that things can change and thankfully that happened."

The introduction of Jamie Murphy and Omar Daley gave the Steelmen fresh impetus as Nicky Law volleyed home a late leveller to cancel out Garry O'Connor's opener for Hibs.

"With 12 minutes to go and still being one down, I suppose we would've settled for a point. Great goal to get us back into it.

"After that, we weren't content. Both teams went for it and it was a decent game.

"We had a lot of possession without having a real threat. I was happy with the way we played.

"Where we kept the ball at times, we could've moved it quicker. For the possession we had, we didn't create anything, whereas Hibs after the goal looked a little bit dangerous on the break.

"I thought the two young centre-halves were excellent for us.

"It was a point gained without our two most experienced players in [Stephen] Craigan and [Steven] Hammell and also Steve Jennings, who's been a key player for us."

Page was sent off late in the game after picking up a second booking for tripping Roy O'Donovan.

"I think he's got to go but I felt for Pagey," said McCall.

"I don't think he meant to do it as a professional foul, he just was a split second late."

Steven Saunders made a late appearance off the bench, his first since picking up an Achilles injury and McCall is pleased to have the defender back as Motherwell seek to secure European qualification in the post-split Scottish Premier League fixtures.

"It was good to get him on the bench," added McCall.

"He's still not ready to start. Once he did his injury, we didn't expect him back till the beginning of next season.