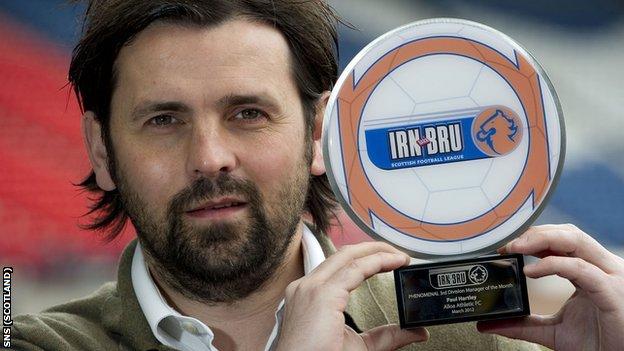 Alloa Athletic manager Paul Hartley was delighted to watch his side clinch the Scottish Third Division title and promotion in style.

The Wasps' 8-1 win over Elgin, coupled with Stranraer's defeat to Clyde, gave Hartley a league championship triumph in his debut season in management.

"It was just a fitting way to win the title," Hartley told BBC Scotland.

"Some of these guys have been playing 15, 16 years and they've never won a medal. I was just delighted for them."

Stevie May netted four of Alloa's goals, with veteran Robbie Winters, Ryan McCord and Craig Campbell also on target after an own goal by Mark Nicolson opened the scoring.

It's a great grounding for me. I love the job

"I couldn't see that coming," said Hartley of the emphatic win.

"I know they were down to 10 men [after Elgin goalkeeper Alexander Clark's dismissal] but it could've been more than eight goals, we were just terrific.

"It doesn't happen a lot, you don't win titles all the time. The players have been absolutely brilliant, we've had four defeats in 32 games.

"At the end of November, we drew 1-1 at Montrose. If Annan had won, they would've gone eight points clear of us. It just shows you the turnaround."

May was signed on loan from St Johnstone in December and Hartley praised the teenage striker's attitude.

"He's scored 17 goals in 17 games," said Hartley. "The bottom line is he's too good for the Third Division but we're just thankful that we've got him.

"He can go on to bigger and better things. He works his socks off every single week in every training session for me.

"We'd love to [have him in the Second Division]. It'll just depend on what happens when he goes back and St Johnstone's situation."

"They had the disappointment of getting relegated last year," added the former Scotland international. "A year down the line and we're back up.

"It's a great grounding for me. I love the job, I love working with the players, dealing with directors and going away to watch the opposition. It's a learning curve."