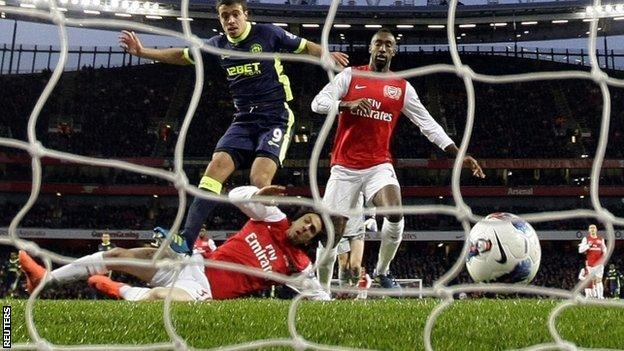 Di Santo finished off a break and Gomez tapped in to give the Latics a 2-0 lead after eight minutes.

Thomas Vermaelen's header halved the deficit midway through the first half.

But Arsenal could not find another and wasted the chance to move eight points clear in third, while Wigan are five points above the relegation zone.

The Latics, who had only won back-to-back Premier League matches once before under Martinez, gave their survival hopes a major boost with a fourth win in five games and they have now lost just twice in 11 matches.

For both of Wigan's goals, which came in the space of 94 seconds, Mikel Arteta was off the field with an ankle problem that forced his substitution.

But, having had 82 minutes to find a way back, Arsenal manager Arsene Wenger will be frustrated at his team's failure to claim at least a point.

Despite pinning the visitors in their own half during the second period, Martinez's side still had the better chances and, having gone into the game with eight wins in nine matches, this was a performance that will raise familiar questions for Wenger.

Wigan, who had lost 12 of their 13 league games in London under Martinez, had previously only managed a goal in the first 20 minutes of a match on one occasion this season so few would have predicted their blistering start.

Vermaelen thumped a shot wide from distance and Yossi Benayoun had a header tipped over by Ali Al-Habsi before the visitors took the lead with an explosive break.

James McCarthy won the ball on the edge of his area and sent Victor Moses into space before Gomez guided a pass through for Di Santo, who touched past Wojciech Szczesny and tapped in.

Less than 90 seconds later, Moses was allowed far too much space down the left and, after Szczesny got a hand to Gomez's first effort, the Spaniard clipped in to double the advantage.

Arsenal pulled one back when Vermaelen met Tomas Rosicky's cross with a powerful header.

Johan Djourou also shot wide and Rosicky lifted an effort over after a quick break from the hosts.

The Latics continued to be pinned in their own territory after the interval but threatened again when Moses broke and had a curling effort pushed away by Szczesny.

Moses wasted another chance when he tore away from Djourou only to give Szczesny a simple save from well outside the area rather than carry the ball further.

Gomez also volleyed over at the far post after Moses once again tore into space down the left.

Wigan had to endure some anxious moments in the closing stages but Al Habsi was never really stretched and, just five days after their 1-0 win over Manchester United, the Latics held on for a memorable victory.