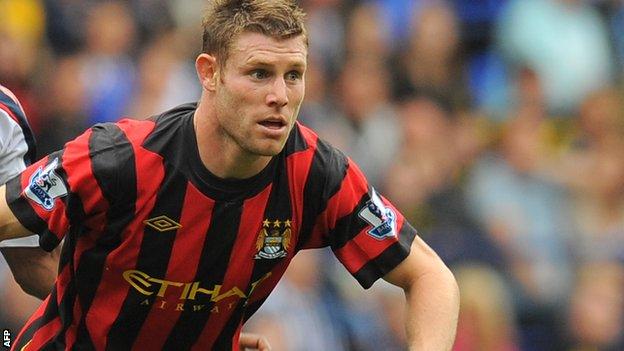 James Milner believes Manchester City's lack of "ruthlessness" away from home has cost them the Premier League title.

While City have only dropped two points at home, Sunday's 1-0 loss at Arsenal was their fifth defeat of the campaign.

"We have played well for most of the season, but have come unstuck over the past few weeks - most of the time away from home," the midfielder said.

"It is about having that ruthlessness on the road. We have given everything we can, and it was not good enough."

The result capped a rapid turnaround in fortunes for the challengers, as Roberto Mancini's men had led the title race by five points as recently as 3 March when they beat Bolton Wanderers 2-0 the day before United travelled to White Hart Lane to face Tottenham Hotspur.

City's only blemish on their record at the Etihad Stadium is the 3-3 draw with Sunderland on 31 March, a scoreline that stopped them equalling Liverpool's all-time top-flight record of 21 consecutive home wins set in 1972.

"As a team, we have set standards throughout the season, but we have not met them," Milner said.

"But we have another game in a couple of days [on Wednesday at home to West Bromwich Albion] and we have to pick ourselves up and go again.

"From now, we will try to win the remaining six, which is all we can do, and see where that takes us.

"We just have to concentrate on doing what we have to do, on our own game and, whatever happens this season, whether we win it or don't, we have to make sure we learn from the good and the poor things which have gone on."