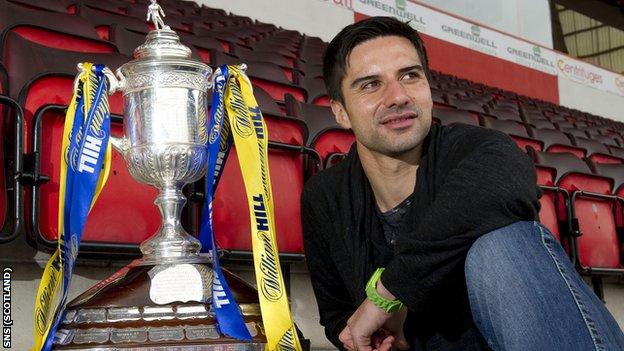 Striker Rory Fallon is not anticipating a classic when Aberdeen meet Hibernian at Hampden on Saturday for a place in the Scottish Cup final.

"Hibs are in the same boat as us and they'll give everything they can to get to the final," said the 30-year-old.

"I don't think it will be a very open game. It will be tight and it could be decided by a mistake.

"It's the team that can handle the pressure on the day, that's what it boils down to."

Three Scottish Premier League meetings between the teams this season have yielded just one goal.

That solitary strike came at Pittodrie in December from a Scott Vernon penalty kick which Peter Pawlett was retrospectively found guilty of diving to win.

"When it comes to getting to a cup final I don't think we can be too choosy about how we perform, just as long as we win."

There are so many things that can come from the final, that it makes the semi final and kind of final in itself

But the Dons will be favourites this time since they are nine points ahead of their opponents in the league and have won four of their last seven clashes with the Easter Road side, losing only once.

"Hibs will be scrapping for their lives," warned Fallon, who played for New Zealand at the 2010 World Cup.

"This week we will be really focusing on tactics and making sure we go well in training.

"Everyone has had one eye on the semi final and hoping they don't get injured.

"It's a great opportunity to get to a final. It's something that I haven't managed in my career yet.

"On any given day, anyone can win and then there's the incentive of playing in Europe, which is something all of the players dream of.

"There are so many things that can come from the final, that it makes the semi final and kind of final in itself."

Fallon, who was voted player of the round for his double in the 2-1 quarter-final victory at Motherwell, was an unused substitute in Saturday's 3-1 win over Dundee United, while Hibs warmed up with a 1-1 draw at home to the Steelmen on Sunday.

"The boys are really chomping at the bit," added Fallon.

"We've got a lot of people coming back from injuries and the bench on Saturday was really strong.

"The gaffer is going to have some tough decisions to make.

"I want to play and so does everyone else. There's obviously going to be a few lads left upset, but that's football.

"No matter what happens, if I'm playing, on the bench or in the stands, I'll be right behind my team."