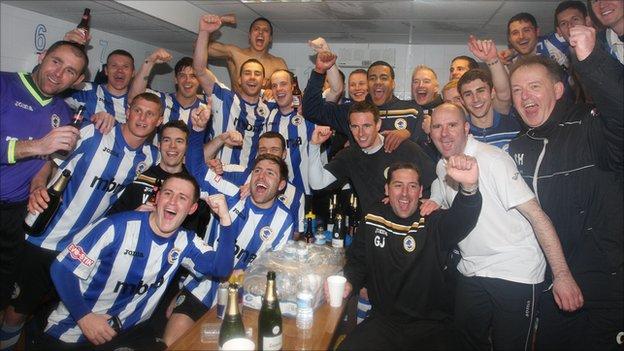 Chester FC have won promotion for the second successive season in front of over 5,000 people at the Deva Stadium.

Needing a point to go up, Neil Young's side were promoted as Evo-Stik Premier champions after drawing 1-1 with nearest rivals Northwich Victoria.

Kyle Armstrong put the Vics ahead just after the break.

But top scorer Matty McGinn levelled late on to send the majority of the 5,009 crowd into rapture and book Blue Square Bet North football next term.

The Easter Monday Deva Stadium attendance was a record for an Evo-Stik League game.

"It's an unbelievable achievement.

"To be standing here after two years with two championships is unbelievable and quite emotional because we do put a lot of hard work in."

Chester reformed after the previous administration at the Deva Stadium was wound up in the High Court in London in February 2010, two thirds of the way through their first season back at Conference level.

They were then punished by being relegated five rungs down the league ladder, before being allowed, on appeal, to start last season in the Evo-Stik North, which they went on to win.

Now run by their own fans, three years on from being relegated from the Football League in April 2009, they are targeting a return.

But, playing in front of an average crowd of more than 2,700 every week, they have become a great local success story. And, if things go to plan, they could now be as little as two years away from retuirning to the Football League.