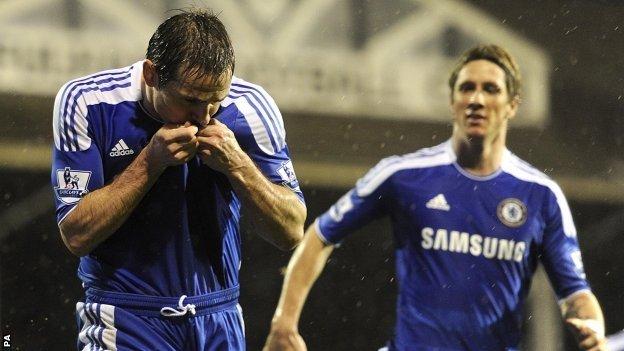 Chelsea midfielder Frank Lampard has praised the impact of interim boss Roberto di Matteo as the Blues continue to fight on three fronts.

Lampard scored his 150th Premier League goal, from the penalty spot, in Monday's 1-1 draw with Fulham.

The 33-year-old said: "Robbie has been good to me. I have played more and when you play more you are more confident. A lot of credit has got to go to him.

"I think he has made a big change to everyone here."

The England international continued: "I think you can see the atmosphere in the squad here by looking at the results - they speak for themselves.

"It's not easy for him to come in from being number two to take charge.

"He loves this club; he's got it in his heart. That's a great thing to see and everyone has reacted to that."

The penalty in the dying seconds of the first half saw Lampard reach another career landmark but he said it was nothing to celebrate after dropping two points following Clint Dempsey's late leveller.

"It feels like a defeat in there after leading for so long," he added.

"It's definitely a missed opportunity after Tottenham's result [a 2-1 defeat at home to Norwich], but we knew it was going to be difficult coming here because they have been playing very well.

"Personal achievements are nice but it doesn't feel too good right now. Maybe when I am an old man looking back on it it will be nice but it's not right now."

Following the draw Chelsea sit sixth in the Premier League table and face Tottenham in the FA Cup semi-final on Sunday before the two-legged Champions League semi-final with Barcelona.

"It's very exciting times," said Lampard. "We are still fighting on a few fronts but we know it can all get taken away very quickly."

Di Matteo added: "You look at it and we're closer to that fourth spot than we were. We were always playing catch-up, so the situation was difficult from the start.

"We have to look at it positively. We are closer now than we were a month ago.

"We've got a good squad, a squad full of good players. We will utilise them.

"Despite [Tottenham's] result, we just have to try and win as many points as we can. When you're playing catch-up, the pressure is always on the team behind.

"We're a point closer to the other team. That's how I see it. We have to think positive."

The Italian was also full of praise for Lampard, adding: "He has been a tremendous servant for this club over the years and for the Premier League.

"He keeps playing games and scoring goals for this club and it's good that he's at this club."