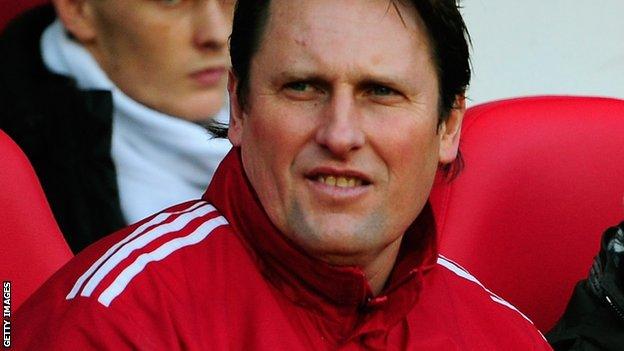 Assistant manager Colin Pascoe admits Swansea need to be more clinical in front of goal as they look to end a run of three straight defeats.

The defeat against Newcastle was their third consecutive Premier League loss.

The Swans will be hoping to halt the run of defeats when they face Queens Park Rangers on Wednesday.

"Unfortunately the other day we did not have the cutting edge for the final pass or shot," said Pascoe.

Despite dominating against Newcastle United at the Liberty Stadium, Swansea were punished by two Papiss Cisse goals.

And although acknowledging they will have to be more clinical in front of goal, Pascoe says Swansea will not compromise the style of play which has received many plaudits this season.

"We will never change how we play. We will keep passing, there were 900-odd passes we completed against Newcastle, which is a record for ourselves," he said.

I am quite surprised to see them [QPR struggling, they played so well last year, and scored a shed full of goals

"But you have to put the ball in the back of the net. The teams we have played are good teams with good players and they are hard to break down.

"But credit to Newcastle, Cisse has got nine goals in eight matches and is in top form, he took his two chances and they went away with the points. That's what you pay £9m for."

The Swans look to turn around their worst league run for eight years when they head to Loftus Road on Wednesday night to face a QPR side battling desperately to retain their top-flight status.

"When you get to the business end of the season everyone gets nervous and anxious because they need the points.

"It's going to be tough and we know what we have to do. You do fight harder when you are struggling. You are fighting for survival and you do fight that extra bit.

"Every game is tough but come the last five or six games with sides needing points it does become even tougher."

Pascoe admits he has been surprised to see last season's Championship winners, who are above the drop zone on goal difference, languishing at the lower end of the table.

"I am quite surprised to see them struggling, they played so well last year, and scored a shed full of goals," he said.

"Unfortunately for QPR they have had a couple of sendings off, that hasn't helped them either but I am surprised they have not done so well so far."