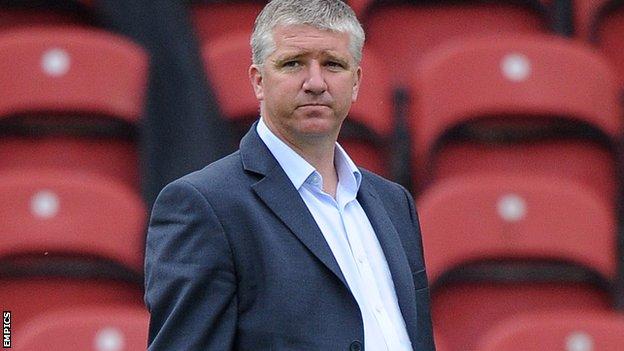 Torquay United have the character to get promoted out of League Two, according to manager Martin Ling.

Ten-man Torquay came back from 2-1 down to salvage a late point at Oxford on Monday and stay second in the table.

"The character and all the ingredients that are needed for a promotion side are definitely in the dressing room," Ling told BBC Radio Devon.

"We know the other results went against us, but we're still in second place and still fighting away."

League Two manager of the month Ling believes that leaders Swindon Town have all but secured one of the three automatic promotion places, meaning the Gulls will fight it out with Crawley, Shrewsbury and Southend - who Torquay face on Saturday - for the final two spots.

"It's going to be who's going to hold their nerve over those last four games.

"But if you look at the characteristics you need, I think they're in our dressing room, but we're going to have to keep showing them over the next four games."

Torquay had a first-half lead and saw a Eunan O'Kane effort ruled out for offside before going 2-1 down.

They came back with a last minute goal from Taiwo Atieno and Ling says it shows the confidence of his side that they were unhappy to leave the Kassam Stadium with only a draw.

"We're disappointed with a point at Oxford with 10 men, and that probably proves how far we've come," Ling added.