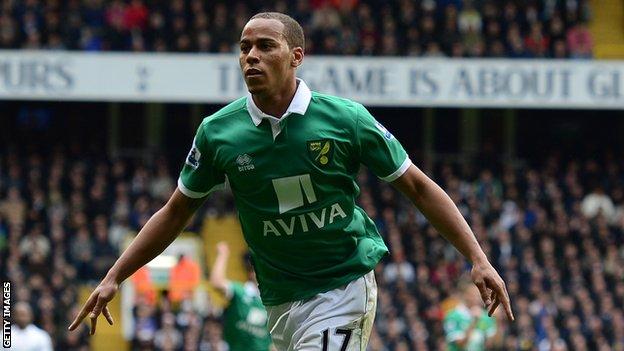 The 23-year-old landed his first Canaries goal to secure a 2-1 victory against the top-four hopefuls.

He told BBC Radio Norfolk: "A lot of the lads and the gaffer have been on at me to shoot more, particularly Holt.

"He's been pulling me aside and having little quiet chats with me. It's all helped," he continued.

"He's a massive influence not just on the pitch but off it. I'm delighted to get a goal and three points at Tottenham."

His drive from the edge of the area ended the former Brighton man's 30-game run in all competitions without a goal in Norwich colours.

"I've had enough chances haven't I? You can't say it was a matter of time but if you don't shoot you don't score," said the summer signing.

The result moved Paul Lambert's side onto 43 points for the season and maintains their position as the highest ranked of all the newly-promoted sides.

And Bennett believes clinching a victory at White Hart Lane will give the club a marquee success to look back on after promising yet winless performances against Manchester United, Arsenal, Chelsea and Liverpool earlier in the campaign.

"All season we've been close to beating the so-called bigger teams and not quite managed to do it," he said.

"But now we have and hopefully the football club and fans can enjoy it and look forward to Man City at home next week."