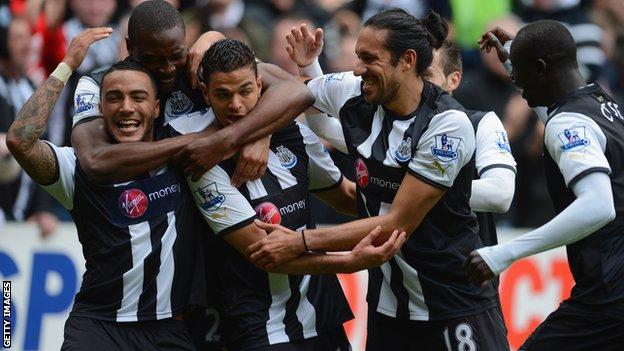 Newcastle United have the great prize right in front of them with five games left this season - the prospect of Champions League football is right there.

It is testimony to the fantastic job done by manager Alan Pardew and his players, as well as the strategy of owner Mike Ashley, that Newcastle can realistically think about something that would have been dreamland for them at the start of the season.

Not even the most optimistic Newcastle United fans, if they are honest, would have contemplated this situation last summer. Noboby would.

And yet here they are, with Tottenham losing to Norwich City and Chelsea faltering at Fulham on Easter Monday, right at the centre of the battle for a place in the top four.

Newcastle are two points ahead of Chelsea and level on points with fourth-placed Spurs, so nobody can rule them out after the momentum they have built. The club seems very well run under an owner who has been heavily criticised and the team is getting the job done at the time of the season when it matters most.

Pardew's team looks the real deal, the full package. I never had them down as relegation strugglers but at the start of the season I would have suggested mid-table.

Even when they have had bad results, such as when they lost 5-0 at Spurs, they have come right back and that is the sign of an improving, quality side.

Owner Ashley was criticised for sacking Chris Hughton and replacing him with Pardew, selling Andy Carroll to Liverpool and latterly pulling down the famous St James' Park sign and replacing it with the Sports Direct Arena.

Pardew himself was not a popular appointment but the dissenting voices are quiet now as Newcastle are seeing the fruits of sensible financial management, excellent football management and a scouting structure and transfer policy that has seen four high-profile players leave and yet the team improve dramatically.

When Carroll, Jose Enrique, Kevin Nolan and Joey Barton left, those remaining will have been wondering who was coming in. Bring in two or three duds and trouble lies ahead, but Newcastle - with chief scout Graham Carr a major influence - seem to have got almost every one spot on.

The players will have looked at these new players in training and then on the pitch and thought: "We're in business here."

Demba Ba scored the goals early in the season, Yohan Cabaye has been hugely influential, Hatem Ben Arfa is back from injury and produced a world-class goal in the win against Bolton - and the arrival of Papiss Cisse from SC Freiburg in January has topped it off.

Cisse has given them a real lift. He is a really tasty player - he scores goals, has got great movement and the fact he is consistently putting the ball in the back of the net will give huge confidence to the rest of the team.

When you are operating in the mid-range market of, say, between £3m and £10m, if you get a reasonable proportion of those deals right you will say you are doing well. Newcastle's system seems to have allowed them to get almost every one right.

They are not strictly gambles at that price but plenty of clubs will have looked at those players. It was Newcastle who did their homework, and the table provides your answer to any questions about its success.

The scouts have continued to come up with these players and Pardew clearly has great faith in Carr. The ratio of successful signings is amazing.

If you get it right in Newcastle you have 52,000 passionate Geordies creating a wonderful, volatile atmosphere every week and they will be scenting something special in the next few weeks.

There have been a few false dawns at Newcastle and since the departure of the great Sir Bobby Robson they have had their times in the doldrums - and the Championship - but now everyone in the Toon Army will believe they can realistically finish fourth. And they can.

The story of Newcastle's season so far has been a remarkable one. The ending could be even better.