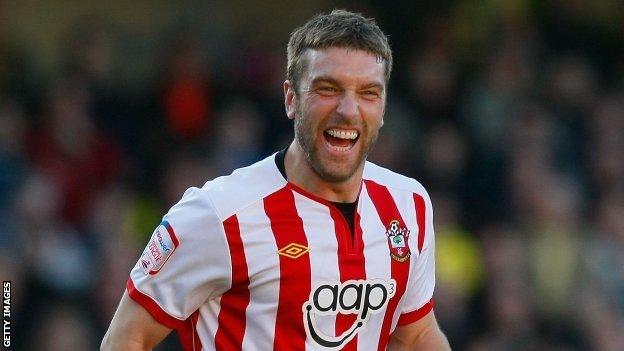 Southampton striker Rickie Lambert has played down the importance of Friday's clash with Reading, saying it will not decide the winner of the Championship.

Leaders Saints take on second-place Reading at St Mary's with the winners all but certain of promotion.

But while victory may help seal promotion, Lambert does not believe it will decide who win the league title.

"Friday is not the decider. If we beat them or they beat us, either side can still win it," Lambert told BBC Solent.

Lambert added: "It's very dangerous when you win a game like that to think you have won the league and all of a sudden you lose the next game making the previous result meaningless.

I never normally set targets but if I don't get 30 in the league I'll be disappointed. We've got four games left so I should do it

"It is massively important and will go a long way to determining the winner of the league but it does not necessarily mean they will win it."

Saints beat Crystal Palace on Easter Monday to maintain their place at the top, with Lambert scoring twice.

The goals were his 29th and 30th in all competitions this season, and Lambert has now set himself of scoring 30 in the league. He currently has 26.

"It was a great win, a great afternoon and a great atmosphere and our fans were absolutely superb," added Lambert.

"From the first minute we set about it the right way and got stuck into them.

"It was only a matter of time before we scored, it was a great ball to my head and I couldn't miss.

"I was happy with my second also, it was one of my better ones. I caught it sweet and it went in at the far post.

"I never normally set targets but if I don't get 30 in the league I'll be disappointed. We've got four games left so I should do it, but like I say, as long as we win I'll be happy. The result is what matters at this stage."