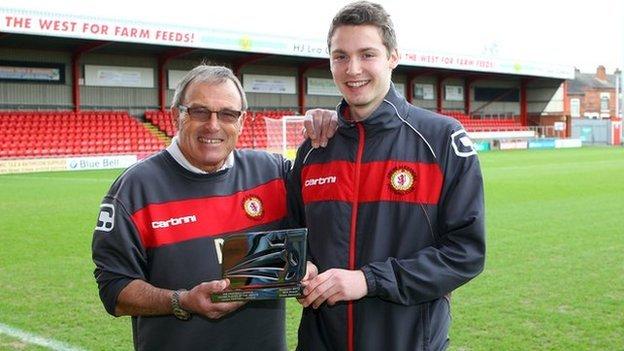 With a history of nurturing and selling youth prospects, 18-year-old Nick Powell could be the latest star to roll off the Crewe Alexandra conveyor belt.

After making his debut at the age of 16, and with 56 first-team appearances already under his belt, Powell has been tipped for the big time.

But with the club posting losses of nearly £1m in April, and with an academy that requires the sale of a £1m player every two seasons, Powell's departure could be on the cards sooner rather than later.

And he has no shortage of suitors, with a host of Premier League scouts tracking his progress every weekend.

The likes of Manchester United, Arsenal, Chelsea, Everton and Wigan have all reportedly been tracking the winner of December's Football League Young Player of the Month for December award.

Powell also represented the England Under-18 team in a recent friendly against Poland last month, alongside Crewe teammates Ben Garratt and Max Clayton, and it seems the Alex academy is maintaining its tradition of producing impressive - and profitable - players.

"We've had an understanding with young players that come through this football club.

"When the right move comes at the right time, we don't stand in their way."

Should any of the current generation leave for pastures new, they would add to a list of talented players nurtured and sold on by former boss Dario Gradi, now director of football at Gresty Road.

Gradi has brought up, blooded and shipped out players like Dean Ashton, Danny Murphy, Seth Johnson, David Vaughan, Rob Hulse, Billy Jones and Nicky Maynard in his 29-year association with the club.

The Alex's former boss was also quick to snap up Robbie Savage and David Platt after they were released by Manchester United, while Luke Varney was brought in from non-league Quorn for £50,000.

"Young players can come through the academy, and they know they're going to get a shot in the first team and hopefully launch their careers," Bowler continued.

"At the same time, that generates that necessary income in order for us to fund the academy going forward."

In total, Gradi has been responsible for recouping over £20m by selling players educated at the club and the Powell generation could push that figure towards, or even beyond, £30m.

And at a time when the business of football has become an increasingly tricky path to tread, Powell looks set to ensure that the Alex's academy continues to deliver on its investment.