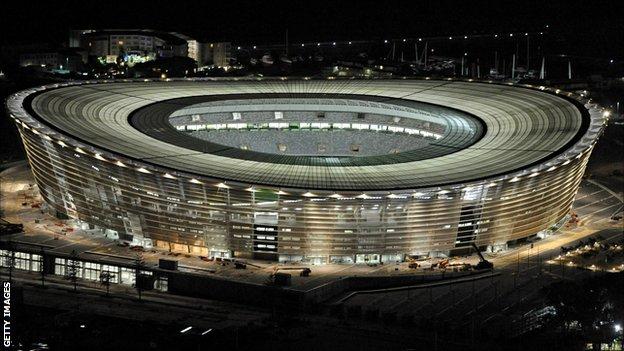 A public spat between Cape Town's authorities and the local organising committee may rule the city out of the running to become one of the five host cities for next year's Africa Cup of Nations.

As the city went public about its concerns over the South African Football Association's (Safa) demands for financial guarantees and the cost of hosting - which is believed to be around $3million - the CEO of the Local Organising Committee (LOC), Mvuzo Mbebe, accused the city of baulking at the fee "just because it's Africa".

Mbebe said the Nations Cup's requirements were much lower than that of the 2010 World Cup which saw Cape Town host eight games, including a semi-final.

"What we've asked cities is that they must contribute accommodation, pay for catering at various VIP areas, security and referee costs," Mbebe said.

The Nations Cup is much smaller, the attendances wouldn't be the same and we don't think the interest in coming to the matches would be as great as for the World Cup

Grant Pascoe, the City of Cape Town's mayoral committee member for Tourism, Events and Marketing believes it is unrealistic to base the Nations Cup funding model on that of the World Cup.

"The Nations Cup is much smaller, the attendances wouldn't be the same and we don't think the interest in coming to the matches would be as great as for the World Cup," Pascoe said.

"As much as we would love to be a host city for the Nations Cup, we aren't prepared to cover all the costs as required by Safa because it would just place another burden on our ratepayers," Pascoe added.

Pascoe denied Mbebe's claim that Cape Town was not prepared to meet the costs "just because it's Africa".

"Being a host city for the Nations Cup for us would be great.

"It would fit into our strategy of attracting the untapped African market. We are serious about hosting but not at all costs.

"We cannot be paying for entertainment, for the travel arrangements of everyone coming - we just cannot do that. We want to be realistic in what we can afford," he said.

According to Pascoe, the cities bidding to host the Nations Cup only became aware of the costs at the beginning of March when they received the bid documents.

"That didn't give us much time, we only had a week to prepare our bid, so cities didn't know up front what costs they would have to meet.

"The amounts came to about R27m (just over $3m) per city, but there were clauses that would allow for further costs that could be decided upon by Safa and the LOC so you don't know what the final bill would be to the city."

While Pascoe is adamant that he still considers Cape Town to be in the race to host Nations Cup games he conceded that he was concerned that the LOC and the Confederation of African Football (Caf) had already indicated that five cities would be chosen to host next year's tournament, after initial indications were that there could be as many as seven.

"It does concern us that such an announcement had been made but we are still hopeful of being one of those five," he said.

Meanwhile, the LOC is meeting with the South African government in an effort to finalise the issue of financing the hosting of the tournament.

"They have been meeting to discuss various issues and I'm confident that the process is on track for the five host cities to be named by 20 April as planned," Dominic Chimhavi, Safa's Head of Communications said.

Reliable sources indicate that Rustenburg, Port Elizabeth and Johannesburg - which is likely to host the opening game and the final - have already signed their agreements with the LOC, leaving cities like Durban, Nelspruit, Bloemfontein, Cape Town and Polokwane to fight for the remaining two spots.