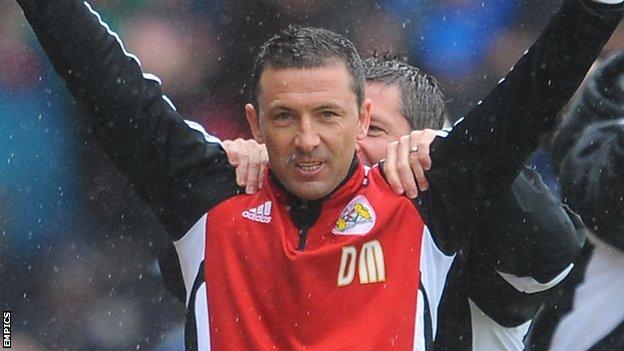 Bristol City manager Derek McInnes has warned his players their battle against relegation is not over.

The Robins picked up victories over fellow strugglers Nottingham Forest and Coventry over the weekend to lift them four points clear of the drop zone.

"I always thought if we could pick up six points from both games then it would give us real encouragement," the Scotsman told BBC Radio Bristol.

"It's a job half done. We need more big results and the players know that."

McInnes' side beat 19th-placed Forest and Coventry, who sit 22nd, to record back-to-back wins for the first time since December.

"You've got to enjoy days like this," he continued. "I had a few beers last night and sat and watched the Birmingham game, so I've got an idea of my team for next week.

"I think it's dangerous to get too excited about it but you've got to enjoy what's been a pretty intense week. There's still work to do and we've got to remind ourselves of that.

"We're going to need a few more special days between now and the end of the season."

McInnes was quick to praise the impact of the loanees he brought into his squad last month.

QPR midfielder Hogan Ephraim and Burnley defender Andre Amougou have secured regular places in the squad, while Cardiff defender Dekel Keinan has made one appearance since arriving at Ashton Gate.

"Andre's a character and he's got a bit about him," said McInnes.

"We'd spoken to plenty of managers who worked with him - Owen Coyle and Brendan Rogers - so we knew he could play at a level. He's not short of confidence and he's been excellent.

"Hogan has certainly made a big impression. He's a player we've watched and he's managed to score a goal and set up a goal.

"We picked two teams over the weekend to get the job done and we got it just about right."