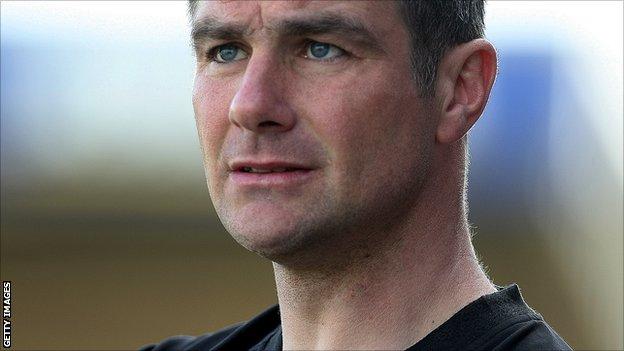 Bury manager Richie Barker believes one win from their four remaining matches should be enough to guarantee survival.

The Shakers defeated Colchester 4-1 at Gigg Lane on Monday to move seven points clear of the relegation zone.

Barker told BBC Radio Manchester: "Leyton Orient, Wycombe and Oldham all lost as well so we've given ourselves a bit of breathing space.

"I would say that one win from our final four games will probably, just about, see us over the line."

Monday's victory was only their second win in 16 matches and Bury's performance drew high praise from their manager.

"I thought we were excellent for 88 minutes of the game," said Barker. "I thought we dominated the game and their goalkeeper probably made it more respectable.

"There's been a lot of doom and gloom about but we knew we were going to have a difficult time and hopefully we've come through that.

"The only disappointment for me was that it wasn't a clean sheet but, having said that, I thought the players were fantastic."

Bury, currently 17th in League One, have home fixtures against Bournemouth and Oldham, plus visits to Notts County and Stevenage, remaining this season.