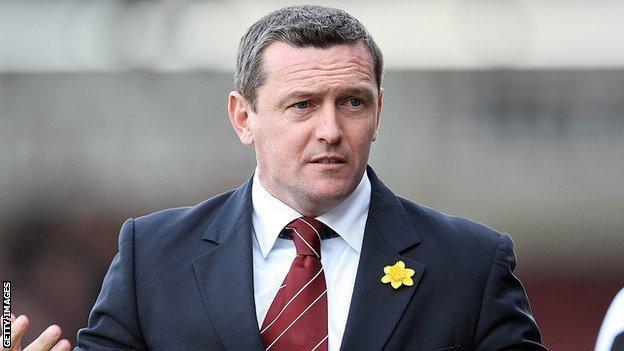 On 12 November 2011, Gary Johnson's Northampton Town were beaten by Luton Town in the FA Cup.

It was their sixth defeat in seven matches and, with the Cobblers hovering three points above the League Two relegation zone, it led to his exit from Sixfields.

"It was as bleak as it's ever been in my nine or ten years here."

Two caretaker managers could only watch, near helpless, as Northampton were thrashed by Shrewsbury and Plymouth and the arrival of former Watford, Coventry and Colchester boss Aidy Boothroyd was widely welcomed.

But Johnson had arrived with a big reputation as well.

Fans will tell you that Boothroyd has lived up to his in 2011/12. Northampton have survived, largely thanks to a 21 point haul in February and March.

Given that the Cobblers had taken just four points from nine matches in October and November, it has been a remarkable transformation.

"It's nice to be in a position where we don't have to worry about what the Conference would hold," said Boothroyd.

"It would've been a disaster, in terms of the club's size, ambition and the money that's been put in by the chairman."

But on Boothroyd's arrival, with former Swindon boss Andy King as his assistant, the problems at the club were worse than first thought.

The squad were bereft of confidence and there was a lack of quality to many of the signings Johnson had made.

The Cobblers were staring at relegation to the Blue Square Bet Premier as those problems manifested themselves in a continuation of bad results.

They did not win for five matches under Boothroyd, and the 2-1 triumph at Morecambe was their only victory in nine.

More than an entire team left the club - although a six-figure bid for top scorer Adebayo Akinfenwa was resisted - and there was some canny recruitment.

Midfielders Luke Guttridge and Ben Harding added steel to the centre of the park and enabled Ben Tozer to play a holding role more consistently.

Experienced centre-half Clarke Carlisle was handed the captaincy and promptly shored up the defence, also bringing the best out of Kelvin Langmead.

But despite the evidence of their survival and solid form in recent months, Northampton are by no means the finished product or promotion chasers - yet.

In April, they suffered successive defeats by Swindon,Bradford and Crawley and only a draw at relegation-threatened Hereford finally guaranteed their survival.

Boothroyd believes the squad are "six or seven pieces short of our jigsaw at the moment".

The rebuilding process may involve replacing livewire midfielder Michael Jacobs who was the subject of a bid from a Championship club this week and is out of contract soon.

With loanees Carlisle, Blair Adams and Brett Williams having also played their parts this season, Jacobs is not alone is having options to consider this summer.

"I'm sure that there will be a lot of movement in the summer because I think we need to have a real rebuilding to make us a force again in the division."

Two games remain in League Two this season, but the goal that at one stage looked deeply unlikely has been realised.

Little wonder the chairman is satisfied and keen to see the improvements continue under Boothroyd, who is on a rolling contract but committed to the project.

"If we are successful [next season], we'll do everything we can to keep him," said Cardoza.

"He's certainly the best manager I've worked with by a long way. If we can give him the budget to not just get us out of this league, but the next league, who knows?"