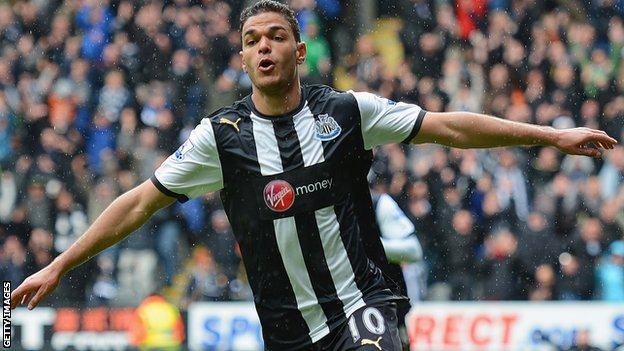 Newcastle United striker Shola Ameobi believes that any team in the Premier League would want to have Hatem Ben Arfa in their squad.

Ben Arfa, 25, is looking to establish himself in the Magpies line-up after a long injury lay-off, and scored a wonder goal against Bolton on Monday.

"Any team in the Premier League would love to see him do that for their team," Ameobi told BBC Newcastle.

"He's such a talent. It's such a nice thing to have in your arsenal."

He added: "For somebody to be able to do that, to run past players as if they weren't there and finish like that, is a joy to behold.

"It's great for us because we see that every day. When he does stuff like that it's a piece of magic that nobody else on that pitch could do."

Ben Arfa announced himself in the Premier League with a stunning goal on his full debut against Everton in September 2010, but was then ruled out for the rest of the season after breaking his leg just two weeks later.

Despite the setback, his loan move from French side Marseille was made permanent last summer and he has begun to stake a claim for a place in the starting line-up as Newcastle push for Champions League qualification.

"People forget that when you come from a different country, a different way of life, (the Premier League) is very difficult to adapt to and obviously the injuries that he had didn't help - that would put anyone back," Ameobi continued.

"We've got a great squad of players here who work for each other and who love each other.

"I think he's bought into that, he sees the togetherness that we have and the manager has done a great job to integrate him in everything that we do, not just on the pitch but away from the training ground too.

"I feel like he sees a home here now. We've got a great asset there and if we can utilise that the best we can then the sky is the limit for the kid."