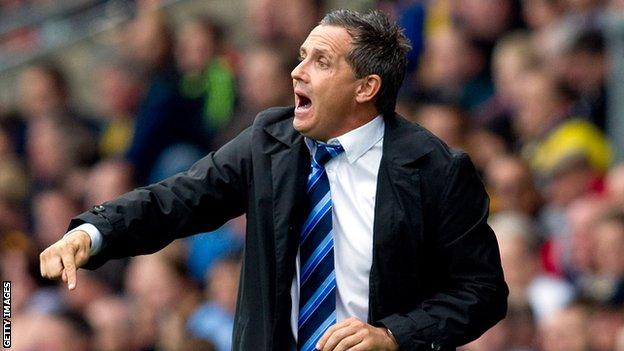 New Luton Town boss Paul Buckle has said his side's came after a stern discussion at the team's hotel.

Buckle watched the Hatters go down

He then led out the side for he first time in Monday's success against relegation-threatened Hayes.

"It's my job as manager to organise us and we needed a rocket," the former Torquay and Bristol Rovers manager told BBC Three Counties Radio.

"They got it and they responded to it. It's what they've needed and they can now go and feel good about themselves and show everyone what good players they are."

Luton, who sacked previous boss Gary Brabin following a run of one win in seven Blue Square Bet Premier games, are three points short of the play-off places, but have at least one game in hand on the teams above them.

The club have failed to achieve promotion back to League Two since their relegation in 2009.

"We have no chance of getting out this division if we have a team that goes onto the pitch thinking it's just going to happen," added Buckle, who guided Torquay back into the league the year the Hatters were demoted.

"If teams feel there's a weakness there when they prod us they won't go away. If we stand strong they won't get near us.

"After the Braintree game we went straight back to the hotel, I didn't mince my words with the players. I've leant on everybody."