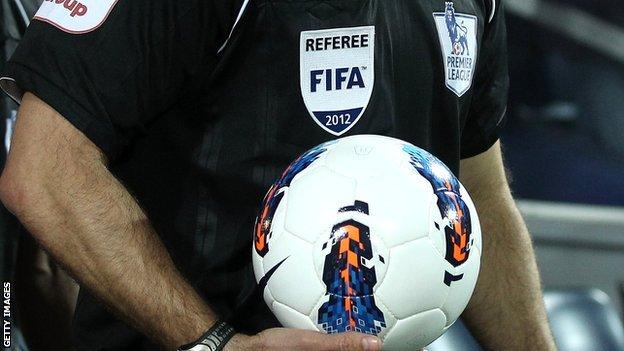 A former top-level British referee has criticised modern officials following a string of controversial decisions in the Premier League over Easter weekend.

"Clive is entitled to his opinion but the facts point in the opposite direction," he said.

QPR manager Mark Hughes and Wigan boss Roberto Martinez both spoke out after key incidents went against their sides in the battle to avoid relegation.

"You should have confidence that referees will get key decisions right," said Hughes after the final whistle. "Just lately a lot of managers have lost faith in them."

And he reckons Hughes is "100% right" to question referees' abilities following the dismissal of Shaun Derry during Rangers' 2-0 defeat at Old Trafford.

Thomas said: "We haven't got our act together at all.

"I don't see that the referees of today are even in the right positions to give right decisions. That concerns me.

The referee was right there. If he didn't see it, why didn't he see it? That would be my concern if I was the referee

"Referees today are concerned, it seems, far more about what the assessors think of them, and are not thinking how to referee a game.

"It never worried me what the assessors would say."

Manchester City striker Mario Balotelli was sent for two bookable offences in the defeat by Arsenal on Sunday, but much post-match coverage focused on a challenge on Alex Song which went unpunished.

Thomas said: "That tackle was a disgrace. The studs were up and went on the player's leg. He should have been sent off then but he wasn't.

"The referee was right there. If he didn't see it, why didn't he see it? That would be my concern if I was the referee.

PGMOL provides match officials for the top flight of English football and Dorward added: "As he [Thomas] should know all too well, sometimes officials make human errors but the truth is that standards in officiating have never been higher.

"The Match Delegates report - compiled by former players and managers and which the clubs provide feedback on after every Premier League match - show that referees get over 92% of major decisions right.

"Data from ProZone additionally shows that assistant referees have got over 99% of offside decisions right this season.

"PGMOL do analyse reasons why errors are made and are always working on improving officiating technique.

"Everything that is available is used: both of the Match Delegates and PGMOL Assessors reports, match footage and ProZone data are analysed, there are a team of refereeing coaches working with them all season long, and also former players and managers helping improve their positioning.

"The fact that we are one of only three countries in world football to have three elite referees suggests that English officiating is of a very high standard."

Thomas officiated at the 1974 World Cup in West Germany and the '78 tournament in Argentina four years later.

He had a reputation as a disciplinarian and is widely remembered for disallowing a Zico headed goal for Brazil in a 1978 World Cup group game against Sweden by blowing for full-time while a corner ball was still in mid-air.

At the 1976 Euros in Yugoslavia, Thomas oversaw an upset when the 'Total Football' generation of Holland, spearheaded by Johan Cruyff, was defeated at the semi-final stage by Czechoslovakia.

In that match in Zagreb, Thomas sent off three players and threatened to abandon the fixture as the game descended into acrimony in extra-time.