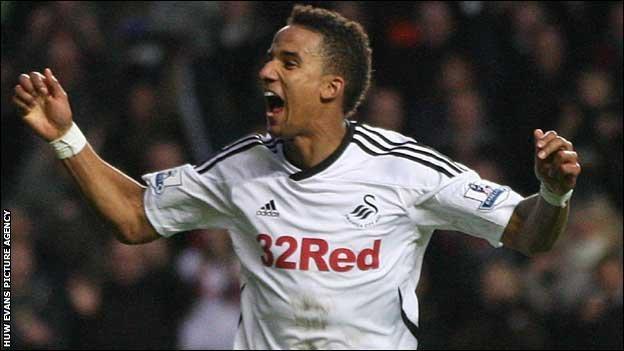 Scott Sinclair has warned Swansea City against complacency as they are still not safe from relegation after three successive Premier League defeats.

Swansea have impressed on their Premier League debut but defeats to Everton, Tottenham and Newcastle means they are not mathematically assured of survival.

The 14th-placed Swans visit relegation-threatened QPR on Wednesday hoping to end their worst run of the season.

"All of the players at Swansea are saying we're not safe," said Sinclair.

"It is because we are not - and we don't want to get dragged into the relegation zone.

"We need to end those losses and win on Wednesday and beat QPR. We need to get safe then we can start looking forward and seeing how high we can go up the table."

Swansea had enjoyed an impressive run of results which has seen them beat Manchester City and Arsenal at home, as well as holding Chelsea to a draw.

But the Welsh club have suffered three league losses in a row for the first time since losing to York, Bury and Lincoln in Division Three in January 2003.

Assistant manager Colin Pascoe believes Swansea will secure safety if they can beat QPR at Loftus Road for the first time in their history.

"We have always said 40 points, everyone says 40 is the number," said Pascoe. "But we need another three points to be totally safe.

"There are six games left, if we get three points that should be us safe as it means the other teams have to win four games and if they lose again it means they would need five wins from six, which is difficult for anyone."

The Liberty Stadium side currently stand 11 points clear of the relegation zone, with a vastly superior goal difference to the clubs battling it out at the foot of the table.

Swansea would jump above West Bromwich Albion and Stoke City if they beat Mark Hughes' QPR on Wednesday.

The London club are above the drop zone on goal difference and with games against Chelsea, Tottenham and Manchester City to come, they will be desperate to pick up three points.

"It will be very tough, they are fighting for their lives," said England under-21 international Sinclair, who had a short spell on loan at QPR in 2007.

"We need to go there and give it an extra push to get the three points and get ourselves safe.

"The target is to try to get that 10th position but the main target has always been to stay up, and we need a couple more wins before thinking about moving up the table.

"There is more pressure on us to get results as everyone is fighting for survival."