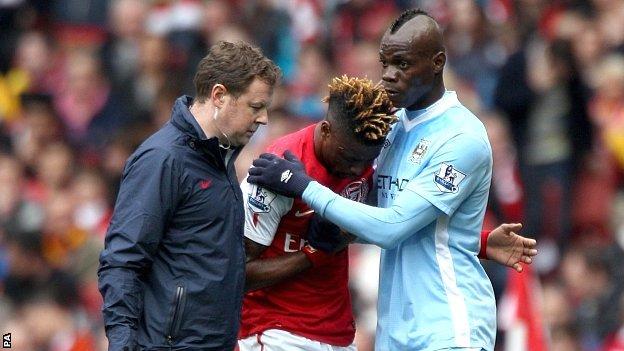 Manchester City's Mario Balotelli has escaped the prospect of an additional six-game ban for his tackle on Alex Song in the 1-0 defeat at Arsenal.

Referee Martin Atkinson took no action in the match, but reported the incident had been seen, ruling out retrospective Football Association action.

Balotelli was sent off after picking up yellow cards for two unrelated fouls.

He could have faced extra three-game bans for violent conduct and what would have been a fourth dismissal of season.

In addition to his dismissal at Emirates Stadium, Balotelli has previously been sent off in the 1-1 draw with Liverpool in November and was retrospectively charged with violent conduct after he appeared to stamp on Scott Parker in the win over Tottenham in January.

The FA insists that, while it could reevaluate the incident involving Parker, it would not take a second look at Balotelli's challenge on Saturday.

"Retrospective action was introduced for off-the-ball incidents where there was no contest for possession and could not be deemed to be re-refereeing an incident," it said.

"In agreement with Fifa, this is how 'not seen' incidents are dealt with retrospectively in England. It is a policy that is agreed with all football stakeholders."