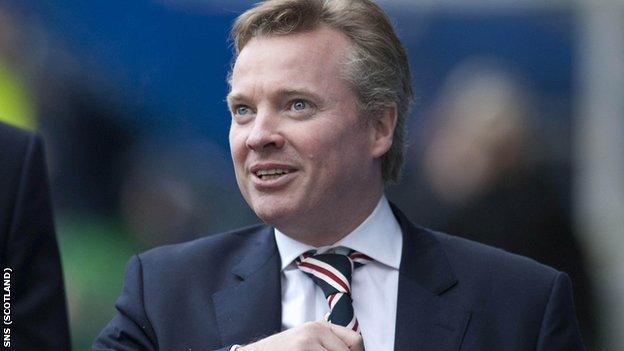 Rangers owner Craig Whyte says that he has spoken with two of the three parties bidding to buy the club but has had no formal offer to buy his shares.

The administrator at Ibrox is currently weighing up the offers and is due to choose a preferred bidder soon.

"I've said I won't stand in the way of a takeover and that remains my position," Whyte told BBC Scotland.

"I am assuming that a preferred bidder can be announced subject to a deal being done with me."

"Best and final" offers were received last week by Duff & Phelps, who took over the running of the club from Whyte when Rangers entered administration in mid-February.

Whyte purchased an 85% shareholding in the Glasgow giants for £1 from Sir David Murray in May 2011.

However, director Andrew Ellis claims he was promised a near-25% stake by Whyte and is taking legal action against the owner.

"I'd be surprised if he has spoken to any of the buyers," Ellis told BBC Scotland.

Whyte has also been through the courts in a bid to secure his shareholding.

When announcing that three bids were being considered further, David Whitehouse of Duff & Phelps described the process as "extremely complicated".

But, despite revealing that Rangers' total debts could be as much as £134m, Whitehouse also said he believed the club can exit administration via a company voluntary arrangement (CVA).

The alternative would be liquidation.

Meanwhile, Whyte also told BBC Scotland that he has no intention of coming to Glasgow to answer Scottish Football Association charges of bringing the game into disrepute.

An independent inquiry led by Lord William Nimmo Smith had found that Whyte was "not a fit and proper person" to own a football club.

Having been delayed after a request for Whyte's lawyers, the case will be heard at Hampden on 17 April.

"Why would I come back to answer the SFA charges?" asked Whyte.

"The process is farcical. They have delivered their verdict before the trial, so what is the point?"