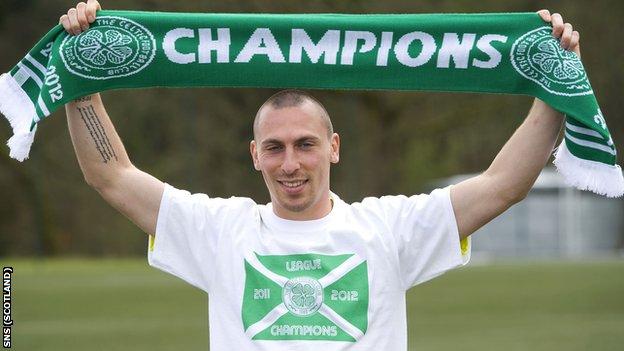 Captain Scott Brown says Celtic can approach Sunday's Scottish Cup semi-final against Hearts with a weight off their shoulders.

Celtic secured the Scottish title - their first since Brown's debut season with them in 2008 - after a 6-0 hammering of Kilmarnock on Saturday.

"The first one was incredible as well," the 26-year-old said.

"We've had four years without one. It's been a great lift off everyone's shoulders, that's for sure."

Celtic's championship win had looked inevitable from the moment reigning champions Rangers were docked 10 points for going into administration, but Brown was relieved when it finally came.

"It just seemed it was getting harder and harder to get it back, but we have managed to do it and we're delighted," he said.

"I think that's the hardest point, just trying to get over the line."

And Brown says it was a different feeling winning the title as club captain.

"It's an honour," the former Hibernian midfielder explained. "It was probably the best feeling I have had at this club yet.

"It's not just about myself or anyone else, it's about the team."

Following the Ibrox side's win in last month's Old Firm derby, Rangers striker Kyle Lafferty had claimed his side were still the best in Scotland.

Asked if the title win had answered his rival, Brown said: "I don't think we have to really answer that. We showed what we can do.

"At the end of the day, we have won the league and we are 18 points clear and that's good enough for us."

Now Celtic face Hearts, who sit sixth in the SPL, at Hampden Park.

"Everyone is still on a high, but we have another big game coming up on Sunday," said Scotland midfielder Brown.

"We have got to focus and get ready for that, get back into training and being sharp.

"We have had a couple of good days and enjoyed it, but that has passed now and we have a Scottish Cup game coming up."

Brown went off early in the second half at Rugby Park with a tight groin, but he expects to be fit for Hampden.